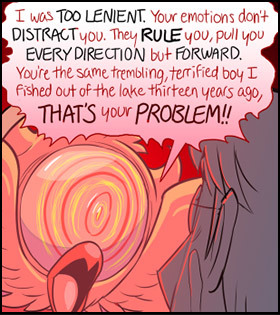 Someone delivers a speech to another character on all the reasons why that other character sucks or is a horrible person. There are several contexts in which this can happen.

open/close all folders
A Villain Addresses a Hero
Not only has the Big Bad killed your Love Interest, slain the Team Pet, and finally taken over the world, they must grind your self-worth into the asphalt and explain to you why you failed to stop their Evil Plan. This is where they list all the reasons you are a poor excuse for a hero(ine) and never had a prayer of stopping them: you lack the skills, the weapons and the powers needed, you childishly fight for outdated ideals, your costume is ugly and your mentor always hated you.

Frequently a brand of Evil Gloating and/or Break Them by Talking. In a well-done speech, the villain will state things that the hero (and audience) can't argue with and when the fight is done, the hero stays troubled because the Villain Has a Point. However, maybe they're total BS, but it's delivered with such conviction it almost makes the hero (and audience) agree that they were wrong to have dared challenge the villain in the first place.

Sometimes, it makes the point that the people the hero are trying to defend aren't worth the trouble. An especially arrogant Big Bad will use this to let the hero know they're just a lesser version of the Big Bad himself and the only difference is they're not saddled with morals. A villain going for a low-blow might bring up some previous encounter between the two when they overpowered the hero, as to state that the same thing will happen again. What You Are in the Dark can (and often does) follow.

A hero worth their salt might respond with their own speech along the lines of a "No More Holding Back" Speech or a Picard or Kirk Summation, among others. If it's an action movie, the hero will usually say "Shut Up, Hannibal!" and then declare what and who they truly are. Sometimes the hero survives only because they're Not Worth Killing, in which case they'll invariably prove that they are later in the story. Often a Moment of Awesome if a Jerkass gives this to someone and they respond with a better one.

A Villain Addresses Another Villain
Villains can also give this to other villains on an Evil Versus Evil stage. The content of this speech is usually along the lines of how they're Eviler Than Thou and pointing out flaws and shortcomings in the other villain, like the Magnificent Bastard (or Bitch) chiding a Smug Snake, a Card-Carrying Villain mocking a Knight Templar for employing the same methods but believing their actions to be right and just, a calculating practitioner of Pragmatic Villainy berating a Stupid Evil villain for being too sadistic to actually achieve anything, or in a conflict between the Evil Genius and The Brute, have the Evil Genius mock the Brute for using brute force to compensate for their low intelligence and explain their simple-mindedness makes him predictable and as such easy to beat, or the Brute pointing out how the Evil Genius relies on their minions and Humongous Mecha to fight their battles and for all their vaunted intelligence, they can't make any of their big schemes stick.

Advertisement:
A Hero Addresses Another Hero
Speeches from hero to hero usually come up whenever a hero's Designated Hero status becomes irritating to the other protagonist, or they feel that the hero being called out must be taken down a peg or more. This is also occasionally done in Good Versus Good scenarios where a protagonist's morality is being called into question by another protagonist who doesn't agree with their methods. It usually takes place following a hero doing something particularly unheroic, or if their general unpleasantness has gone past the point of acceptance. Often doubles as What Were You Thinking? and What the Hell, Hero?, and in particularly bad circumstances it may cause allies to turn against one another.
An Acquaintance/Friend Addresses Another Acquaintance/Friend
This speech is given by someone who's just frustrated with the other person. This is not an attempt to bring down or break an opponent. This is not an exchange between heroes and villains (heck, they might even be friends). This is someone, tired of everything they have to deal with, giving a frank and brutally honest assessment of the person they're dealing with, often in a What the Hell, Hero? moment. This can be prone to backfire with a suitably shallow, self-obsessed, and/or savvy target, who typically responds with "You've just listed all of my best features!" Other times however, the one who gave the speech overreacted and says that they are too harsh and it's not really how they feel. Will often provoke an attempted refutation or justification from the target; which, depending on the source, can be played for comedy, drama, or Wangst. If the target is a Designated Hero, this occurrence just might motivate them to become a real hero.
A Protagonist Calls Out Themselves
Sometimes, a protagonist in a particular shows is so filled with self-loathing that, when prompted, decide that they're fed up with themselves, and calls out the worst of villains: themselves. If done in a comedy or a Dramedy, this is usually Played for Laughs. However, in other cases, this is almost always done for drama. This might be because the hero is suffering Heroic BSoD, or might have implied (or explicitly stated) to suffer Depression. This is the ultimate form of Self-Deprecation in a work. Of course, this could also be done to get people to sympathize with the protagonist.
Someone Calls Out the Crowd
The indulgences of the crowd disgusts the speaker to such an extent that they must speak out against it. Calling everyone in attendance for their failures in life in a cruel but often necessary manner. If it gets meta and is directed at the audience, it also counts as You Bastard!.
One thing all seven types of speech have in common is that the speaker has a point, even if they're villains. To give a speech about it, the speaker has to have thought it through and can usually have more than one reason why you suck. This is because the writer of the story has also thought it through. Compare to
Advertisement:
Calling the Old Man Out (or Calling the Old Woman Out), which is often a Sub-Trope of this. Also compare Talking the Monster to Death where this is meant to kill or redeem a villain. Could also be a Take That, Scrappy! where someone tells a hated character what the audience feels about them. This can lead to failure if the character receiving the speech Can't Take Criticism.

Contrast Minor Insult Meltdown, where just the tip of the "you suck" iceberg can sink someone to tears. Contrast also You Are Better Than You Think You Are and Grade System Snark. See also Compassionate Critic and Constructive Criticism.

Lastly; no, this isn't the trope that's about the reasons that characters are bad at speaking. Neither is it a meta Justification for This Loser Is You. Finally you'll find that some of these can be used to serve as Dare to Be Badass speeches too.

For a deadlier variation of this trope, see To the Pain.

Calling out the "protesters"

When Brian's attempt to apologize for his questionable tweet to settle the dust is constantly rejected, he goes ballistic on them.

Example of:
Shaming the Mob

Calling out the "protesters"

When Brian's attempt to apologize for his questionable tweet to settle the dust is constantly rejected, he goes ballistic on them.