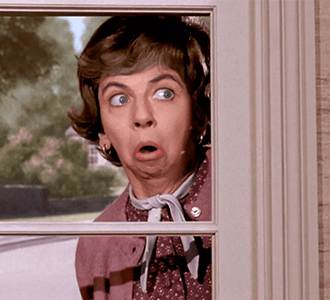 Abner! Come quick!
"If you went to your own room at midnight, locked the door, pulled down the blind, and sneezed, Mrs. Lynde would ask you the next day how your cold was!"
— Anne of Avonlea
Advertisement:

A neighbor (usually female) who just cannot keep to herself. Usually a grotesquely stereotyped shrewish gossip — always on the lookout for delicious secrets and rumors about the characters, which is emphasized by showing her peering suspiciously around her curtains at least Once per Episode.

They usually come in two types. The female type (though not always female) is the epitome of niceness, which serves as an excuse for her chronic curiosity — she will show up on the characters' doorstep with a fresh-baked pie while peering inside over their shoulder. Sometimes the only problem with her is that she always shows up at the wrong time — Nosy Neighbors have a tendency to appear and initiate a long chat when there is something in the other room needing the character's attention that they would rather not let others know about.

The second type is closer to the Cranky Neighbor, and generally just wants to be left alone — until the main characters start acting suspiciously and he feels that he needs to protect his interests and verify that they are not doing anything that may disturb their peace. This usually ends with them going further and getting more involved than intended.

Occasionally a horror trope, when this starts to border on serious stalking.

See also Secret Chaser for when there is some huge secret to be kept hidden from this neighbor. If it's not an impromptu pie delivery she's using as her tactic, she may pop over to ask "May I Borrow a Cup of Sugar?".