Literature / The Fault in Our Stars 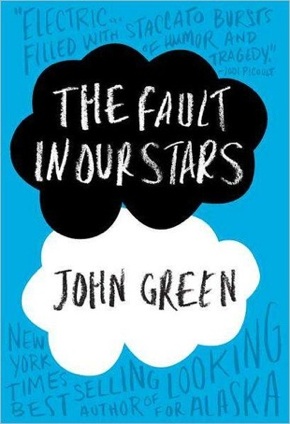 "I can't tell you how thankful I am for our little infinity."
"I fell in love the way you fall asleep: slowly, and then all at once."
— Hazel Grace Lancaster
Advertisement:

The Fault in Our Stars is the fourth solo novel by author John Green, released on January 10th, 2012. The book focuses on a girl named Hazel Grace Lancaster, who is a teenage recluse; her best friends are her parents, and her preferred hobby is rereading her favorite book, An Imperial Affliction, over and over.

One night at Support Group (her parents' idea, not hers), she meets the gorgeous and philosophical Augustus Waters, who piques her curiosity and gets her thinking again about life, adventure...and love.

There's only one snag in this budding romance: Hazel and Augustus met at a cancer support group. Hazel has thyroid cancer and terminal lung tumors, biding their time against perilous drugs, and Augustus is in remission after bone cancer took his leg.

Before the book was released, it reached #1 on the Amazon.com and Barnes & Noble bestseller lists in June 2011, shortly after its title was announced. Barnes & Noble had accidentally released more than a thousand copies prematurely; however, the fandom vowed not to spoil the book for those who had not received copies.

for anyone who has finished reading the book, and only for people who have finished the book. (It is no longer password-protected, although one still runs a high risk of major spoilers.)

A movie adaptation, starring Shailene Woodley as Hazel and Ansel Elgort as Augustus, was released in June 2014. There's also what could be considered a companion book, This Star Won't Go Out, which is the autobiography of Esther Grace Earl, a young girl with terminal cancer similar to Hazel's. Esther and John Green were friends, and she was the inspiration for — though not the direct basis of — Hazel.

Alternative Title(s): The Fault In Our Stars