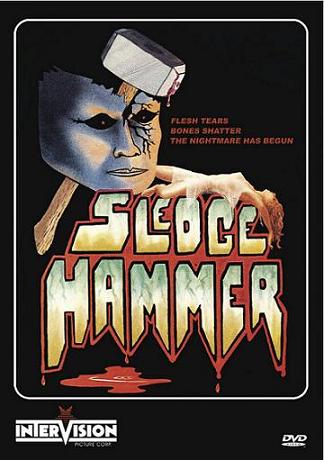 Unfortunately, he does not talk to his weapon.
"Their bodies had been pounded over and over again by a madman with a sledgehammer, until all that was left was a bloody heap of mangled flesh and shattered bones. There was barely enough of their faces left to match their teeth with their dental records. They never found the boy. Some think he just flipped out and ran off, maybe trying to find help in the forest. If so, he probably died. Police say he was probably taken by the killer. In either case, most believe him to be dead. That is, except for some people around here. Folks in this part of the county say he's still out there, in the night. Just watching. Waiting. Waiting for his mother's killer to return. Waiting to take his revenge. The killer was never caught. The prime suspect was of course the woman's husband. There were no charges brought against him. No one knows who did it. No one. He just might come back... tonight."
— Chuck

Sledgehammer is a 1983 Slasher Movie.

In 1973, an abusive woman locks her son in the closet of the secluded cabin she has gone to to rendezvous with her lover, who she intends to leave her husband for; likewise, the lover plans on abandoning his wife. As the two become intimate, an unseen figure (presumably the boy) bashes in the head of the man with a sledgehammer, then beats the mother to an unrecognizable pulp as she begs for mercy.

Ten years later, a group of seven friends (Chuck, Joni, Jimmy, John, Mary, Carol and Joey) acquire the old house, planning to use it to party through the weekend in complete seclusion, with no phones or vehicles (their van having been taken to the shop for repairs). After the initial bouts of boozing and miscellaneous shenanigans, the group leader, Chuck, after telling everyone about the double murder that had occurred a decade earlier, convinces the others to hold a séance to try and contact the spirits of the dead man and woman, to ask them who their uncaught killer was; in reality, the séance is a sham, merely the cover for an elaborate prank Chuck and Joey are going to perform to scare their friends. Unfortunately for everyone, the séance goes horribly right (as they are prone to do in these types of films) and a hulking being wearing a transparent mask and wielding a sledgehammer is brought to the house. Possessing vast supernatural powers as well as inhuman strength, this enigmatic being (apparently the spirit of the child from the opening, whose possible remains are discovered in a sealed-off closet) sets about killing everyone in the house with its spectral sledgehammer and a big old-fashioned knife.

The film's main claim to fame (or infamy) is that it was one of the first shot on video slashers, along with the likes of Boardinghouse, Blood Cult and The Ripper. After languishing in obscurity for decades, the film received a DVD release in 2011, coming complete with special features such as commentaries, making-of featurettes, and interviews with both the director and horror experts.