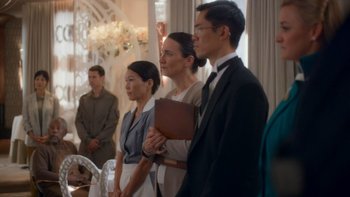 The Staff of Snowpiercer.

Snowpiercer is manned by a diverse crew, consisting of several departments and a strict hierarchy. Everyone, from Third Class and Second, aren't technically just passengers and are actually crew members. They all have a part to play in keeping the train in order.

Melanie's ruthless assistant, who oversees taking people from the Tail or delivering demands to them, activities she seems to feel are beneath her.

A brilliant tactician, hardened leader, and former Special Forces, British SAS who commanded men before the Freeze. He relishes keeping things in order and getting his hands dirty in combat. 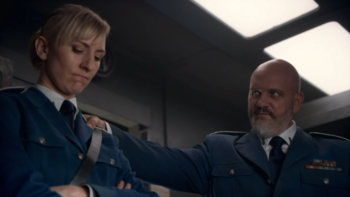 The Brakemen
The Brakemen are the Security Force on board the Snowpiercer. They act very much like the Police force of the old world. They carry only batons as opposed to the Jackboots who carry axes and spears. They also act like detectives and solve various crimes aboard the snowpiercer. They seem to serve as "Officer", as they display seniority to Jackboots who carry out their orders
Roche

The lead brakeman and somewhat of an enforcer. He was employed by the real Mr. Wilford before the Freeze.

A thoughtful, empathetic, and savvy brakeman who is part of the train's security force. She finds herself at the center of a mystery that rocks the train's uneasy status quo.

A young brakeman and police-type figure of the train.

One of the Younger Brakemen-.

A large and fearsome-looking Breachworker, one of the most dangerous jobs on the train, with frostbite scars and stumped ears who is used to the cold and jokes about the hazards of the job.