"My soul, corrupted by vengeance, hath endured torment to find the end of the journey, in my own salvation and your eternal slumber."
Voiced by: Gackt (Japanese), Robin Atkin Downes (Dirge Of Cerberus, English), Oliver Quinn (Crisis Core, English)

A former SOLDIER 1st Class who had a friendly rivalry with Angeal and Sephiroth and is slightly obsessed with LOVELESS, a mysterious book of poems. When he's wounded by Sephiroth and falls mysteriously ill as a result, he defects from Shinra to wage war on them seeking a cure for his conditions. 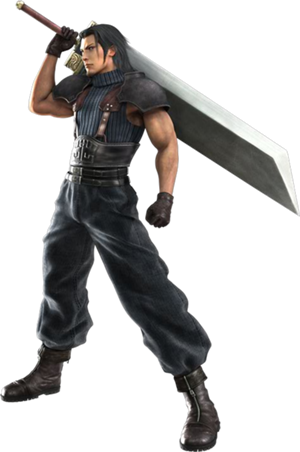 "Embrace your dreams. If you want to be a hero you need to have dreams... and honor."
Voiced by: Kazuhiko Inoue (Japanese), Josh Gilman (English)

Zack's superior in SOLDIER, he's a First Class member and is respected and admired as a symbol of heroism and strength in the company. When Genesis declares war on Shinra, Angeal goes rogue, torn between loyalties to his friends and his career.

The director of SOLDIER, he was born in the slums and has worked his way up through Shinra's ranks through hard work and determination. He advises Zack on furthering his dreams in the company and provides him missions and assignments. However, he acts behind the scenes on a secret agenda.

Another aspiring Second Class SOLDIER, he's one of Zack's closest friends in the organization and has a knack for learning things going on in the company that he relays to Zack.