"Maybe on Argentina, maybe in the future" 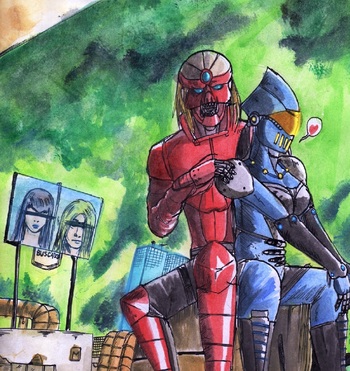 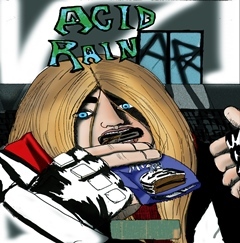 Aqua Regia, formerly known as Acid Rain, is an Argentinian cyberpunk webcomic, The setting is a fairly typical Cyberpunk, set in Argentina which has been on a dictatorship since the seventies (and counting).

The year 2054, Daniel Dietrich, a mercenary, who tries to live as better as he can, taking odd jobs, from the most mundane, to including murders, not that he's happy with his life, he's even shown being stressed because of this. Shit hits the fan when he interrupts a robbery in a local market, he engages in a fight with a thief, and ends with Daniel badly injured and the thief dead.

Moments later he escapes because he doesn't want to end up in jail, after all, a murder it's still a crime. Daniel collapses in a back alley, where he's found by Nimsi, and contracted to fight against the country dictatorship, after deliberating, he reluctanctly accepts.

Art-wise, it has a gritty, somewhat realistic style, but it's still VERY unpolished. It doesn't rely on facial expressions for gags, and it's fairly serious, with little comedy. It has a lot of Shout Outs. In 2017 the author called it a dead project, thus no more updates. However, in late 2019 experienced a Revival/Continuity Reboot on Manga Rock/MR Comics, here

,only to be cancelled once again, although no reason was given so far why. Available for free on Facebook on the "Aqua Regia-Comic" as a placeholder hosting site. Until then, chapters will be uploaded in there.