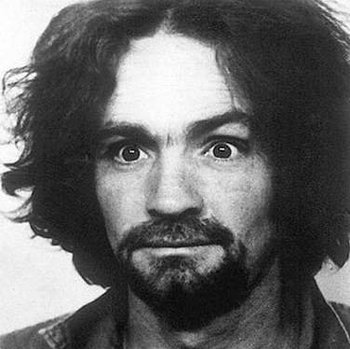 Charles Milles Manson (né Maddox, November 12, 1934 - November 19, 2017) was an American criminal and cult leader. Manson was troubled from a young age — he set his school on fire at age 9 — and spent most of his adolescence and adult life in prison for various petty crimes. After leaving prison in 1967, he managed to attract the attention of a group of nearly 20 young women in the Bay Area; with them, he developed a hippie commune: the Manson Family.

The commune turned into a doomsday cult as Manson developed his theory of an imminent race war, in which Blacks would annihilate all Whites except for the Manson Family, who would become their benevolent rulers. He started calling this "Helter Skelter" after listening to The Beatles' The White Album — he was convinced that the album had apocalyptic hidden messages about the war hidden in its tracks, especially "Helter Skelter."

He soon decided that it was the Manson Family's mission to provoke the coming race war. First, they would create an album that would herald the coming war; this they attempted by co-opting Dennis Wilson's resources for six months while he introduced them to some colleagues in the music industry. The next phase, unfortunately, was deadlier: the Family believed that terrible murders of White people by Black people would be the spark to start the race war; they decided that they should manufacture said murders and blame them on Black people to provoke said war.

The Manson Family committed several brutal murders, including that of Roman Polański's pregnant wife, Sharon Tate — the one that catapulted them into national attention. At each, they left message "Helter Skelter" written in blood on the walls. Manson himself never participated in any of the known murders, but he was arrested for orchestrating them in December 1969, convicted, and sentenced to death. Three years later, after California ruled the death penalty unconstitutional

, his sentence was commuted to life in prison. In September of 1975, Lynette "Squeaky" Fromme, a follower of Manson's who had been spared prison, became the first of two attempted assassins of then-President Gerald Ford that month, apparently attempting to get a new trial for Manson.

Manson remained in prison since then (largely in solitary confinement, for his own safety) and died in 2017 at age 83.

Unrelated to Shirley Manson of Garbage fame, but Marilyn Manson's Stage Name is based on him.

Charles Manson and the Manson Family murders in media: