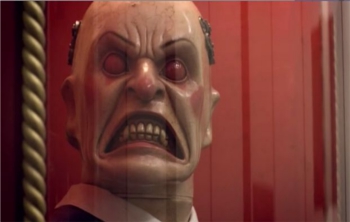 ...who peed in your corn flakes?
Forget A horse and a man: above, below/One has a plan, but both must go/Mile after mile, above, beneath/One has a smile, and one has teeth/Though the man above might say hello/Expect no love from the beast below.
— Creepy Little Girl
Protest In bed above we're deep asleep/While greater love lies further deep/This dream must end, this world must know/We all depend on the beast below.
— Amy
Advertisement:
Record

The one where the Doctor and Amy get un-vored.note Whoever wrote that sentence...you have taken me today to horizons I did not want to go.

Inside Starship UK, a group of children sit in class waiting to be graded by their instructor, a smiling robot, which is apparently only capable of repeating the same three compliments. But one boy, Timmy, is a bit reluctant to stand in front of the robot, and as he finally musters up the courage, the robot's expression changes into a sour frown, as it tells him that he has been a bad boy and he is rewarded with the grade "Zero". As he leaves the class to board the vator, his friend, Mandy, warns him against boarding, as students with a zero aren't allowed to ride the vators and will be "sent below" if they do. Timmy, however, doesn't want to walk twenty decks to get home, so he ignores her warning and boards another vator. Inside the vator, another smiling robot sits embedded in the wall, but it changes its expression to the same frown as the teacher robot when Timmy enters. As the vator starts up, a monitor turns on, showing a little girl reciting a poem. Eventually the vator robot's expression changes again, this time to a furious expression with glowing red eyes, and that is when Timmy notices to his horror that the vator isn't heading for his intended destination of London, but instead drops down to Floor 0, with the floor in the vator opening to a red chasm beneath him. Timmy screams in terror, and falls in...

After the intro, we find ourselves immediately after the events of the previous episode, the Doctor takes Amy to the distant future, where she finds Britain in space! After solar flares roasted the Earth, every nation took to the skies. Starship UK houses the future of the British people, as they search the stars for a new home. They land in what seems to be a normal, nice and British marketplace, but the Doctor tells Amy to "notice everything" — they're actually in the midst of a police state, noticing a crying Mandy sitting on a bench, and points out that everybody ignores her and she tries to cry as silently as possible. Then he places a glass of water on the floor, for seemingly no reason. "There's an escaped fish"? Oh really? Well, Doctor, you're being watched, and it seems that you just did "the thing"...

The Doctor notices that everyone is terrified of those smiling robot fellows in the booths, so he sends Amy to interrogate Mandy. She does so, and Mandy leads her to what is apparently a hole in the road, which is covered with a work tent and sealed off for some reason. Despite Mandy's warnings of getting too close, Amy can't stop herself from investigating the hole, which happens to contain what appears to be a tentacle. That's weird, but what's weirder is the sinister-looking group of hooded fellows spraying her with sleeping gas.

Meanwhile, the Doctor is off staying out of trouble (badly), and has headed to the engine room, to find another glass of water. Something's very wrong here — "an impossible truth", as the mysterious woman in front of him calls it. She wears a spooky mask and a red cloak, and demands to know the Doctor's business with that water. Were there an engine on a ship this big, there would be vibrations. The water would move! The woman needs the Doctor's help in unearthing the truth, and tells him that her name is... Liz 10.

Amy wakes up in a "voting booth", and there are three buttons before her — protest, forget and record. She is identified (Age 1,306?! Shut up!), and a film starts to play on the TV screen before her, apparently detailing the history of Starship UK. Suddenly, a whirlwind of images flashes by. Children screaming, violence, terror, pain and most prominently... the Sun. But no sooner is it all over than Amy finds her hand on the forget button. What just happened in those last 20 minutes? A clue to this is offered as Amy's recorded message to herself starts to play. On screen, a distressed Amy pleads "This isn't a trick, this is for real, you've got to find the Doctor and get him off this ship!"

Just then, the Doctor arrives. He examines the light bulb at the top of the room — standard memory wipe, must have erased about 20 minutes. But why? And why would Amy choose to forget? Well, according to Mandy everyone does. But the Doctor isn't scared, and smacks the protest button. Unfortunately, this opens up the floor and catapults both him and Amy down an air-pressure cannon. They land in what appears to be a rubbish dump. But the Doctor soon figures out that it's a tongue. So they're in a giant mouth. Great. The Doctor triggers the un-voring of him and Amy to escape, but the switch to exit this dark chamber... is a forget button. And those Smiler androids in the back are getting pretty irritable.

The two are rescued from the Smilers by Liz 10, who takes them up to her quarters whilst making remarks about the Doctor's history with her kingdom. And why is it her kingdom? Well, that would be because she's been Queen Elizabeth X of England for 10 years! They slowed her body clock to keep her looking like the stamps. In her room, there are a lot of water glasses. And her mask... it's rather old. Very, very old, an antique. Porcelain, too. Stays on because it's perfectly sculpted to her face. So what? So everything, Liz... Just then, some of those hooded blokes show up and ask to take Liz to the Tower of London. She refuses, but it seems that these particular politicians are half-Smiler.

Down in the Tower's torture chamber they find a rather odd installation: a laser in the ceiling perpetually fires shots into part of a very large brain. Piecing together the puzzle, the Doctor figures out that this pain centre, the mouth and the tentacle from earlier are all part of one creature, and... it's what they have instead of an engine. And they're torturing it to keep it going. And then we find out what's wrong with Liz's mask. It's at least 200 years old... and perfectly sculpted to her face. Wait, that can't be right, she's only been Queen for 10 years! Oh... dear. The same 10 years... over and over again, always leading her to this same place — a voting booth. It's her choice: forget or abdicate. Her own recorded message to herself starts to play.

When the solar flares originally roasted the Earth, the UK weren't quite quick enough to make a ship. Their children were screaming as the skies grew hotter. But then it came... like a miracle... a Star Whale. A massive, old, gentle creature, and the last of its kind. They trapped it, built the starship around it, and now they torture it to keep it moving. Heartbreaking. But hey, at least they feed it... with rubbish... and people. Protesters and citizens of limited value, to be precise. But it won't eat the children, like Timmy, who are instead locked up inside the Tower. If Liz chooses to abdicate the ship will disintegrate and everyone will die. But if she chooses to forget, the poor old Space Whale will be in agony for another decade.

The Doctor realises that Amy recorded that message to herself ("Get the Doctor off this ship!") because she didn't want the Doctor to have to make an impossible choice. Heart's in the right place, but witholding information from the Doctor is a bad move, Amy — you don't decide what he needs to know. He tells her that her days as his new companion are over already. Damn Doc. The Doctor Takes a Third Option, preparing to lobotomize the whale so at least it won't be in pain. He says that it's the most horrible thing he'll ever have to do, and he'll just have to pick a new name because he can't do this and live with himself as the Doctor any longer, but there's nothing else that can be done.

Seeing the tentacles playing with Mandy and Timmy, Amy takes the Doctor's advice from earlier and notices everything — "it won't eat the children", "our children screamed!", "It came like a miracle,", "Never interfere in the affairs of other peoples or planets, unless there's children crying?", "Just me now", "The last of its kind". And then she realizes the truth.

She grabs Liz's hand to press the abdicate button and release the whale, at which point Starship UK starts moving faster. But why? Surely it would take its opportunity to escape? No, the kindly old Space Whale simply wanted to help in the first place. They didn't need to torture or trap it. It came because it couldn't bear to see the children cry.

Afterwards, the Doctor tells Amy she couldn't have known that. She responds that maybe he couldn't have known, but that an alien, the last of his kind, who has been through pain and anguish, and just become kinder and unable to see children cry, was something she'd already seen. The Doctor stares at her for a minute, then yanks her into his arms and buries his face in her shoulder; given that it's been less than twenty four hours since he regenerated he has not had a good day - crashing into Earth and now this. They return to the TARDIS when the console's phone starts ringing. It's Winston Churchill, and he wants the Doctor's help, while a Dalek is standing in his office.

As they leave, though, we see that there's a crack in the starship...

"Nobody talk to me- nobody HUMAN HAS ANYTHING TO SAY TO ME TODAY!!"

Alternative Title(s): Doctor Who S 31 E 02 The Beast Below