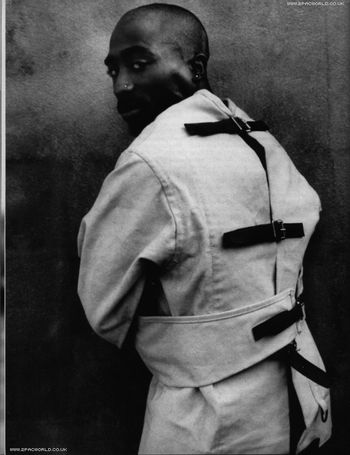 THUG LIFE.
Influences:
"You see, you wouldn't ask why the rose that grew from the concrete had damaged petals. On the contrary, we would all celebrate its tenacity. We would all love its will to reach the sun. Well, we are the roses, this is the concrete and these are my damaged petals. Don't ask me why. Thank God, nigga — ask me how!"
— Tupac Shakur
Advertisement:
"A lot of people think that it was about Biggie on the East Coast and 2Pac on the West Coast. It wasn't like that. Big ran New York. 2Pac ran America."
— Cormega

Tupac Amaru Shakur (born Lesane Parish Crooksnote Renamed at age 1 after Túpac Amaru II, the descendant of the last Incan ruler, Túpac Amaru, June 16, 1971 - September 13, 1996), also known by his stage names 2Pac (or simply Pac) and Makaveli, was an American rapper. In addition to his status as a top-selling recording artist, Shakur was a promising actor, a poet and a social activist.

Most of Shakur's songs are about growing up amid violence and hardship in ghettos, racism, problems in society and conflicts with other rappers. Shakur's work is known for advocating political, economic, social and racial equality. Shakur was initially a roadie and backup dancer for the alternative hip hop group Digital Underground, before forming his own group Thug Life then going solo.note this hasn't stopped people on YouTube from re-labeling Digital Underground songs as "Digital Underground featuring 2Pac", even if he didn't actually appear in the song.