Loads and Loads of Roles 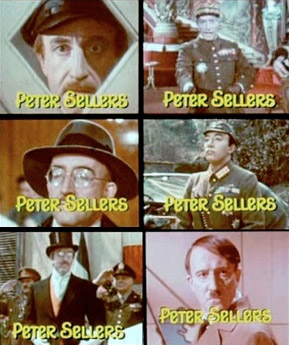 Eddie Murphy wasn't the first.
"Oh look how great and funny I am. I don't even need anyone else. I could make an entire movie where I play all the parts and you would love it because I am Tyler Perry; the God of comedy!"
— Miles Antwiler on

There's Acting for Two. Then there's acting for twenty.

This is where one actor plays a considerable number of roles in a single work (we are not counting Sketch shows).

This is primarily a theatre trope, where it requires the ability to perform pretty rapid costume changes. If the character itself does this, then they're a Master of Disguise.

See Talking to Himself for what this can lead to with voice actors. You Look Familiar is this trope applied to characters over the course of a TV series. You ALL Look Familiar is the video game character model equivalent. If the characters are related, it's an Uncanny Family Resemblance. Compare with Man of a Thousand Faces and Man of a Thousand Voices. Contrast with Two Voices, One Character. May or may not involve Significant Double Casting.