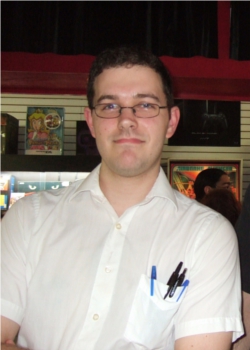 Not to be confused with that other guy.
"This game is ass."
— The Angry Video Game Nerd

A film buff from New Jersey (now living in Philly) with directing aspirations, James Duncan Rolfe (born July 10, 1980 in Haddonfield, New Jersey) remained mostly under the radar until 2006, when he posted a couple of joke reviews he made for his friends a couple years earlier on YouTube, under the name "The Angry Nintendo Nerd". A few years of booming popularity later, he eventually evolved into The Angry Video Game Nerd.

Aside from making Nerd videos, he also has a large number of films (he's been making them since 1989) registered on his website, Cinemassacre.com

. In addition to the Nerd character, he has two other shows: Board James and You Know What's Bullshit?. He also established an improv series with a few friends of his called OverAnalyzers.

He also often posts videos to the site with him acting as himself, either performing interviews, documentaries, or movie reviews, most notable of which is Cinemassacre's Monster Madness, an event that he has taken part in every October since 2007 where he reviews one horror film every day of the month, whether it be an old classic or an obscure treasure, usually in keeping with some sort of theme (So Bad, It's Good films one year, the entire Godzilla series another).

With work on The Movie necessitating a reduction in the frequency of Nerd episodes, Rolfe decided to compensate by launching James and Mike Mondays in December 2012. This is a weekly series in a Let's Play format, where Rolfe and Mike Matei play games that in most cases might not be featured in a Nerd review — whether it's a classic, an obscure game, a romhack, or the occasional game that's already been reviewed. In 2018, Rolfe launched a new series, Cinemassacre Video where James and friends discuss different films, themed around a Retraux VHS rental shop Blockbuster-pastiche, comparable to RedLetterMedia's Half in the Bag series.

He is affiliates with both ScrewAttack and Channel Awesome (despite, or perhaps due to, the Nerd's eternal conflict with The Nostalgia Critic).

open/close all folders
2007 History of Horror
A look at many of the major classics of horror and their influence in shaping the horror genre, covering a broad range of eras. A lot of the movies showcased here were revisited in more detail in later years of Monster Madness.
2008 GodzillaThon
A look at every Godzilla movie. As there weren't 31 of them at the time, GodzillaThon debuted on the 3rd of October, then continued with a new review every day until the end of the month. Prior to Monster Madness 9, this was the only year where the reviews were also available on YouTube, with each video premiering about a week to two weeks earlier than its Cinemassacre.com release (except Godzilla Against Mechagodzilla and Godzilla Final Wars, which remain Cinemassacre-exclusive).
2009 Monster Madness 3
Although there was no distinct theme, this year was conceived as a way for James to cover many of the movies he would've done in History of Horror but didn't have time for, as well as responding to fan requests. The reviews also became longer.
2010 Camp Cult
Identified as a "Schlock-A-Thon" and a "Craparama" in the promo trailer, focusing mostly on campy and bizarre so-bad-it's-good movies, many of them obscure.
2011 Sequel-A-Thon
A thorough look at every installment of four different film franchises, again covering a wide range of eras. Universal Frankenstein, Hammer Dracula, A Nightmare on Elm Street, and Halloween. On Cinemassacre.com, James rated each of the movies out of 10.
2012 80's-A-Thon
Due to James being busy with production of the Angry Video Game Nerd Movie, this year featured 16 reviews instead of the usual 31, starting on the 1st and released every other day (the 3rd, 5th, 7th, etc).
2013 Sequel-A-Thon 2
Touted as "the sequel to Sequel-A-Thon" in the promo trailer, created as an opportunity for James to cover film franchises he didn't have time for in the first sequel-a-thon. This time he looked at five different series; Universal Mummy, Hammer Frankenstein, Gamera, Alien, and the Living Dead Series.
2014 Monster Madness 8
Identified as "Whatever-The-Hell-You-Want-To-Call-It-Athon" in the promo trailer, as it was the first year since Monster Madness 3 without a theme. Unlike Monster Madness 3, it was also the first year without the movie reviews being in chronological order, and even featured a few reviews of TV shows.
2015 Monster Madness 9
Similar to Monster Madness 8 in that it was another random, non-chronological assortment of movies, but it came with its own changes from previous marathons. Whereas the reviews in most of the previous years had only been viewable on Cinemassacre.com, this time around the videos were made available on YouTube as well, appearing on the same day as their Cinemassacre releases. The reviews were divided into three distinct formats:
2016 Monster Madness X
Stated by James to be the final marathon to have a full 31 reviews, since he'd gotten burnt out from the sheer workload of doing a new review for every day of the month. The reviews were all once again scripted, but with stills instead of movie clips like in previous years, making them YouTube-friendly. This year was also divided into several sub-themes depending on the day of the week:
2017 Son of Monster Madness
This year came with five new horror movie reviews, released on "Sunday Bloody Sundays" for both Cinemassacre.com and YouTube. The rest of the month featured "Resurrected Reviews"; YouTube reruns of videos that were formerly exclusive to Cinemassacre, edited to have the movie clips taken out. A few of the Resurrected Reviews were ones that had not been previously included in the Monster Madness line-up.
2018 Monster Madness 2018
Similar to Son of Monster Madness, being a mixture of old and new content. This time around, there were eight new videos.
2019 Monster Madness 2019
The first year since Monster Madness X to have 31 brand new videos, albeit in unscripted discussion format. In total, there were 20 movie reviews from James and one other guest, 4 Rental Reviews, 2 Retail Reviews, 4 James & Mike Mondays episodes, and an Angry Video Game Nerd episode. While it has been a yearly tradition since the very beginning for James & Mike Mondays and The Angry Video Game Nerd to do Halloween-related videos in October, this is the first time both shows have been officially included in the Monster Madness line-up.
2020 Monster Madness 2020
With Rental Reviews having come to an end, this year returned to the general format of Son of Monster Madness and Monster Madness 2018; repeats of older Cinemassacre.com exclusives appearing on YouTube for the first time, along with a few new discussion videos with James and Mike. This time around, the older videos were not edited down to have the clips replaced with stills, and premiered in their original unaltered versions. As explained by Mike, "As you know, content ID can be a problem on YouTube. But it also is a case by case situation on what is problematic and what isn't. For these, I specifically picked videos where there were no content-id issues. So the videos this month will be my original edits."

Tropes applying to Rolfe himself and his work: