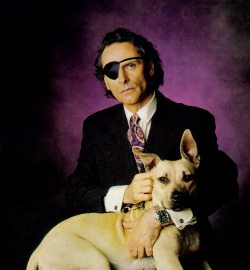 Andrew Henry Vachss (October 19, 1942 – December 27, 2021) is the author of the Burke novels. A small-time criminal raised by the state, Burke started off as a Con Man and unlicensed Private Detective, and as the series continues he graduates to Vigilante Man. He earns a living scamming 'freaks' (generally child abusers, neo-Nazis and wannabe mercenaries), rescuing runaways, taking the occasional case, and committing the occasional act of robbery and blackmail.

Burke is an orphan, but has True Companions who he considers to be his real family, consisting of Max the Silent, The Mole, The Prof and Michelle. Others join as the series continues.

As a lawyer specialising in child abuse cases, Vachss created Burke to express the frustration he felt over society's abandonment and abuse of those for whom it is responsible. He has gone on to write other fiction inspired by this subject, ranging from graphic novels to plays, including tales written in the Batman and Predator universes.

In addition, a series of short stories and novellas center around Cross and his crew, a group of professional mercenaries for hire. The stories tend to be more straight action, centering around slightly more reprehensible human beings like drug dealers.

Summaries of his books:
Advertisement: