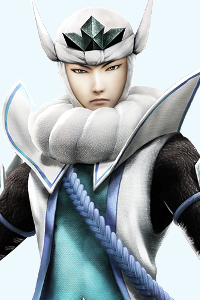 "The heavens whisper for me... to take up arms."

Head of the Uesugi clan from Echigo, Takeda Shingen's main rival. He is also a devout follower of the war-god Bishamonten. Has a very young and effeminate appearance, but don't let this fool you; he's ridiculously fast and one heck of a fighter.

Known as Frost in the Devil Kings. 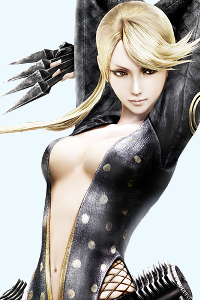 "My life belongs only to that man."

A kunoichi in the service of Uesugi Kenshin, as well as his potential love interest. She also has fierce Belligerent Sexual Tension with Sarutobi Sasuke. Often regarded as the games sex symbol.

Her name in Devil Kings is Venus. She did not exist in Real Life. Though not a playable character, he's quite a prominent mook with a modest popularity. Basically, this guy has an overinflated ego, always exclaiming that he's "INVINCIBLE!!", only to go down like a chump. This trait is endearing enough that he's become Sengoku Basara's official Joke Character.