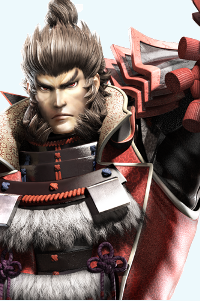 "Nothing can escape the grasp of my hand!"

Introduced in SB2, Hideyoshi is not the little monkey other fictions portray him as. He's a frickin' gorilla-sized man note which is funny because the real Hideyoshi was short even by the average height of the age, completely ruthless and will stop at nothing until Japan is conquered. However, behind his ruthless attitude, he harbors a goal to reinforce Japan and make it a strong and prosperous nation.

He used to be friends with Maeda Keiji, but eventually received a series of Humiliation Conga by Matsunaga Hisahide, which caused him to be Drunk with Power and become the ruthless guy he is today. He's assisted in his endeavors by his strategist Hanbe. 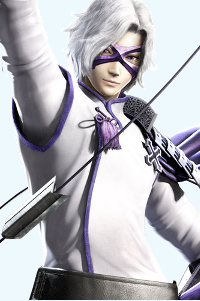 "Just one more step until the dream can be fulfilled."

Hideyoshi's right hand man. A cold, cruel genius who enjoys taking people out with his Whip Sword and looking fabulous. Suffers from tuberculosis.

Hideyoshi's deceased wife, who was also friends with Keiji in the past. Hideyoshi was the one who killed her. 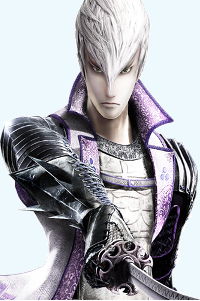 "Lord Hideyoshi, grant me the cruelty to make them suffer!"

Playable character in Sengoku Basara 3. A fanatically loyal subordinate of Hideyoshi, he does not take Hideyoshi's defeat well and swears revenge on Ieyasu. The fastest character in the series so far, he uses a nodachi in the style of iaidou, similar to Kenshin. 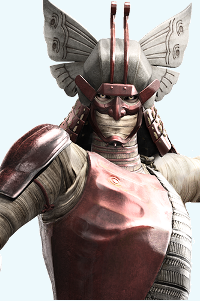 "May misery rain down upon us all!"

Another new character in SB3. Mitsunari's friend and ally, who suffers from leprosy. Because of this, he has to be transported round on a special platform, which can somehow float. Due to going mad from said disease, he holds a grudge against other human beings. So far, only Mitsunari is okay with him. 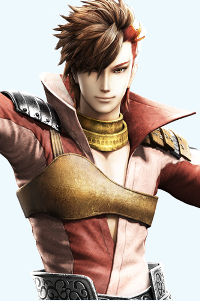 Playable character introduced Sengoku Basara 4. A loyal supporter of Mitsunari who always enjoys a good gamble, and seems to treat battles as such. This flippancy lends itself to his moveset, switching between two blades and flying kicks.