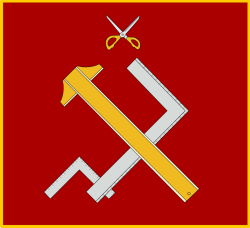 A Soviet Russia-themed school, representing Hokkaido as a whole. Their line-up consists of Soviet / Russian tanks such as T-34/85s

In the movie they team up with St. Gloriana in a friendly show match against Ōarai and Chi-ha-tan Academy. They later return to aid Ōarai in the match against the University team, fielding two T-34/85s, an IS-2 and a KV-2

"All of you are below Katyusha! Your tanks, your technology and your height!" note She's riding on Huge Schoolgirl Nonna's shoulders
Position: Squadron Commander/Tank Commander, T-34/85
Voiced by: Hisako Kanemoto (Japanese), Hilary Haag (English)

Pravda's commander. She commands from a T-34/85

Tropes that are beneath Katyusha

"You're probably thinking you couldn't do that, right Katyusha?"
Position: Tank Commander/Gunner, T-34/85, then IS-2
Voiced by: Sumire Uesaka (Japanese), Shannon Emerick (English)

during the semifinals against Ōarai, then switches to the IS-2

later during the same match.

One of the crew members of Pravda's KV-2 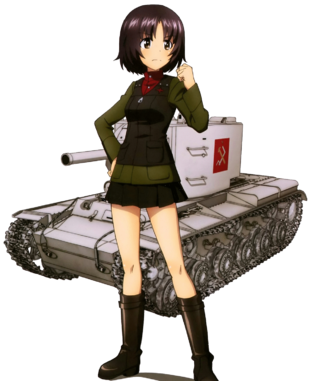 The other loader of Pravda's KV-2.

"Katyusha-sama, it was an honor to fight beside you. For Pravda!"
Position: Tank Commander/Gunner, T-34/85
Voiced by: Jenya Davidyuk (Japanese), Olga Jankowski (English)

Introduced in the movie, one of Katyusha's right hands that prefers to speak Russian, much to Katyusha's chagrin.