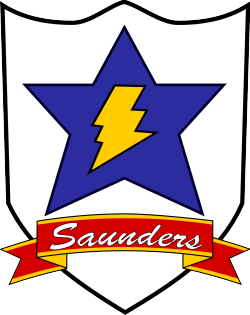 In the movie they assist Ōarai Academy by transporting their tanks to the mainland so they would not be confiscated. They also join the other rival schools as additional forces for Ōarai High School's match against the University Teams, bringing with them an M4A4, M4A1(76)W, and a Firefly.

Tropes for Saunders in general

This is Sensha-do, not war. Your tank will cry if you are a bad person!
Position: Squadron Commander/Tank Commander, M4A4
Voiced by: Ayako Kawasumi (Japanese), Emily Neves (English)

Saunders' leader and commander of an M4 Sherman

Saunders' second-in-command. Serves as gunner on the Sherman Firefly

"Why are those run-down tanks driving us off?" (Turns to her gunner) "Aim to the right! Our school is on a different level than yours!"
Position: Tank Commander/Radio Operator, M4A1(76)W
Voiced by: Aya Hirano (Japanese), Brittney Karbowski (English) 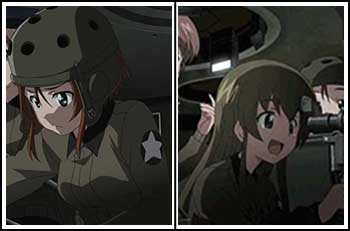 Two nameless crew members of Alice's flag tank during Saunders vs Ōarai. Left and right in the pic, respectively.

Tropes for the two