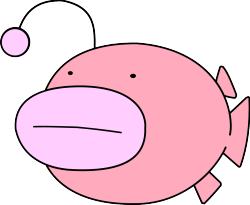 "Whatever happens, we give our best with teamwork."

, a German medium tank, updated in Episode 7 into an Ausf. F2 configuration with a longer 75mm Kwk 40 L/43 gun and increased frontal armor, and later in Episode 10 into an Ausf. H, with a new paintjob and schürzen spaced turret and sideskirt armor. Initially the only Ōarai team without a Theme Naming scheme, their team's name was later given to them by the other teams right before entering the national tournament. 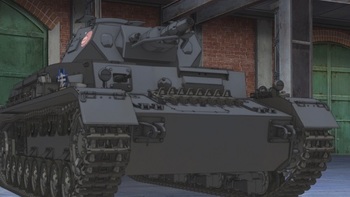 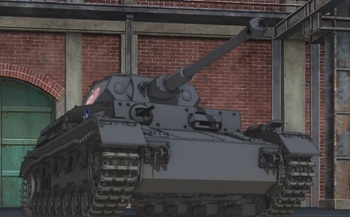 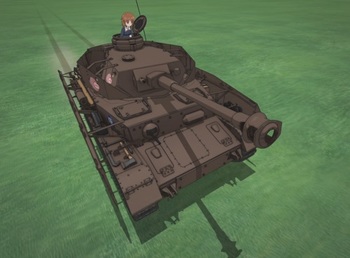 is the first tank the characters find upon the re-establishment of the Ōarai Sensha-do elective. This was assigned to Team A/Anglerfish team. As the tank commanded by Miho, it is by default, the "face" of Ōarai's Sensha-do team.
Advertisement:
Miho Nishizumi 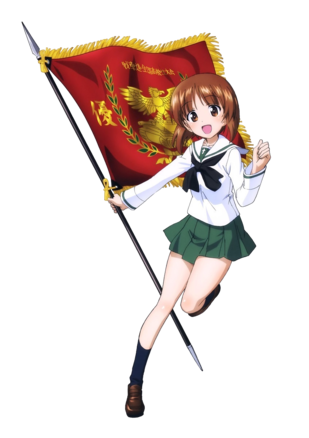 "It's not for the sake of my home. Neither is it to imitate big sis... This summer, I did Panzer with everyone. I felt that I could treasure this memory. That is perhaps... my 'Panzerkraft'."
Position: Tank Commander/Squadron Commander
Voiced by: Mai Fuchigami (Japanese), Margaret McDonald (credited as Meg McDonald) (English)

The main protagonist of the anime and a scion of a clan of famous tankers. She left the discipline after a certain incident and transferred from Kuromorimine into Ōarai, since its Sensha-do class was defunct for over two decades. She was promptly drafted into becoming the leader of its first class in twenty years (as a loader, then later commander of not just her team, but of the school's squadron) after the Student Council discovers her experience.

The main protagonist of the light novel adaptaion, Saori is a redhead with a string of failed searches for romance. She's one of Miho's first friends since her transfer to Ōarai. She becomes Anglerfish Team's radio operator due to her love of small talk. In Das Finale she succeeds Momo Kawashima to be the Student Council's Public Relations Manager.

"No matter for how long I kept arranging the flowers, I felt like something was missing. But I want to work with stronger flowers!"
Position: Gunner
Voiced by: Mami Ozaki (Japanese), Caitlynn French (English)

The other first friend of Miho since her transfer to Ōarai, Hana is the daughter of a family of ikebana (flower arrangement) professionals. She initially sat at the driver's seat, but the thrill of hearing the roar of shells inspired her to man the Panzer's guns. In Das Finale she succeeds Anzu Kadotani as the Student Council President.

The main character of the manga adaptation, Yukari is an energetic tank fangirl who hides severe fitting-in issues. Then she met kindred souls in the form of Miho, Saori and Hana, inspiring her to become the gunner, and later the loader and de facto second-in-command of Anglerfish Team. In Das Finale she succeeds Yuzu Koyama as the Student Council Vice-President.

"In the morning? Can humans even wake up... at six o clock?!"
Position: Driver
Voiced by: Yuka Iguchi (Japanese), Molly Searcy (English)

Saori's childhood friend and a gloomy fellow with a string of tardiness and absences stemming both from her dislike of rising early in the morning and, so she claims, a low blood pressure. She only joins the team because of the incentive of clearing her record. She's placed in charge of driving the Panzer.