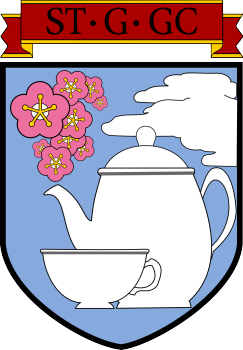 are all seen, along with a "Pink Panther"

, while supplementary materials also include a Cromwell

), and maintains a very British attitude. They have a tradition of sending tea to teams they deem worthy rivals.

They are the first school Ōarai face. It was a practice match ending in St. Gloriana's victory. Miho's skills impressed St. Gloriana's team leader, Darjeeling, enough that the latter takes a shine to the Ōarai girls and attends all their subsequent matches in the tournament proper. Unfortunately, no rematch ever takes place, as St. Gloriana is taken out by Kuromorimine in the semifinals.

In the movie Ōarai and St. Gloriana get their rematch, joined by the Chi-ha-tan Academy and Pravda High School for each team respectively. Unfortunatly for Ōarai the match also ends in St. Gloriana's victory. They later show up to help Ōarai in the University match, fielding their Churchill, a Matilda and a Crusader.

during the St. Gloriana-Ōarai practice match. Also seen in the same tank in preview shots for The Movie.

"According to the data, its weak spot is right there."
Position: Gunner, Churchill Mk. VII
Voiced by: Satomi Akesaka (Drama CD and Movie)

Commander of a Matilda II.

"You can't run away from the top speedster of St. Gloriana!"
Position: Tank Commander, Crusader
Voiced by: Natsumi Takamori

Tropes chased down by Rosehip