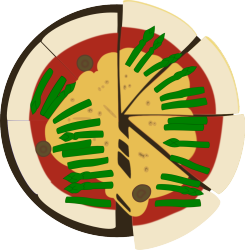 An Italian themed school, representing Aichi Prefecture. Noted to be highly motivated, they have been shown to deploy varieties of Italian tanks such as a Carro Armato P40

Despite being a mere footnote in the main anime, their match against Ōarai is given more depth both in the manga and later on in The Real Anzio Battle OVA, but with completely different circumstances.

In the movie they show up to help Ōarai in the match against the University team, helping to take out the Morser-Karl as well as providing recon for Ōarai's team by riding on the roller-coaster tracks. They field one CV-33 in the match, possibly because it's the only tank that fit on the back of the pickup truck they came in, not being able to afford other options.

during the quarterfinals match against Ōarai.

While initially portrayed in the manga as a Jerkass, her (canon) anime version is a completely different character, being nicer and less tyrannical.

Tropes for the Duce

One of Anzio's senior tankers, she's in charge of commanding Anzio's tankettes. Not the sharpest tool in Anzio's shed.