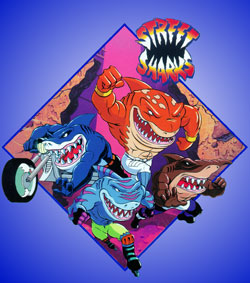 Jawsome!
"They fight, they bite, they kick some serious fin!"
— Tagline
Advertisement:

Street Sharks (1994-1997) was an animated series about four teenage boys whose father is kidnapped by a rival scientist named Dr. Paradigm and transformed into a monster. When they attempt to rescue him, Dr. Paradigm transforms them into anthropomorphic sharks. In their first battle, Dr. Paradigm is injected with the same chemical mixture intended for the sharks' kooky-but-genius sidekick, giving him the ability to transform into a piranha monster when angry. It causes severe drama, because the sharks are then painted as the villains and the villain made the city hero, whose dream it is to mutate everyone into fish people.

Think Teenage Mutant Ninja Turtles minus the actual ninjas and the turtles replaced by sharks.

Discotek Media (yup, the same one that licences retro anime) has licensed this show for an SD Blu-Ray release, set for April 2022. So jawsome.

The Street Sharks are:

Street Sharks has examples of: