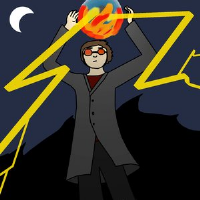 Pictured: Ghost Psychiatrism
Dr. Brinner: Hold on, I need to go to the bathroom.
General Negakipper: No you fool, if you do that, every universe that has ever existed will simultaneously implode!
— Dr. Brinner vs. Zombie Pink Floyd
Advertisement:

Dr. Brinner: Ghost Psychiatrist a comic by Andrew Hussie, of MS Paint Adventures fame, once regarded as magnum opus before his most popular work, Homestuck, was created. It's a work spanning several years and numerous forms ranging from print to image to text to a series of Youtube videos that when first viewed seem to be mere footage of random people's children. It describes the adventures of Doctor Brinner (formerly Doctor Derek Brinner, but that was in a universe that no longer exists), an extraordinarily cool psychiatrist who deals in the dead. The coolness is canon.

On several occasions, Andrew has stated that Dr. Brinner is a commentary/parody on long-running series which employ multiple universes and multiple writers within a single canon, particularly the superhero franchises contained within The Marvel Universe and The DCU. As one might expect from such a commentary, Dr. Brinner uses and abuses the Back from the Dead trope and takes the idea of a multiverse to ridiculous extremes; the comic is also full of Mood Whiplash, ridiculous (and apparently intentional) continuity problems, sporadic (and often temporary) manifestations of Cerebus Syndrome, and blatantly clumsy retcons, especially earlier in the series. True to its premise, it often feels very much like reading the work of dueling writers Armed with Canon rather than the unified work of a single artist; it is very much to Andrew’s credit that he has still managed to create a comic which, in spite of an approach which would seem to lend itself to Stylistic Suck, still manages to be an excellent read. (That said, Andrew seems to have at least partially abandoned the “multiple writers” approach in recent arcs, which have been much more focused than older ones. It’s hard to say whether this shift is an allegory for some new facet of the use of multiple writers within a canon or simply an indication that Andrew was getting tired of intentionally filling his stories with plot holes.)

As a result of all of this, while it definitely boasts its fair share of awesome characters, scenes, and arcs, Dr. Brinner is NOT recommended as a starting point for someone who’s new to Andrew’s work. The story is extremely labyrinthine and can be very difficult to follow (even compared to the likes of Homestuck and Problem Sleuth, which are pretty demanding in their own right); it’s full of Mind Screwy plot twists and concepts, Big Lipped Alligator Moments, and sharp tonal shifts, all of which serve to make Dr. Brinner Andrew’s most inaccessible work despite its deceptively simple premise.

See also: Comments on a Postcard and Candle Cove, two series Andrew has been involved in that take place in the same setting.

Isn't there something we're forgetting?  Dr. Brinner doesn't really strictly exist. It began as a joke, but it quickly mushroomed into a parody of Andrew Hussie's style, that takes place in the MS Paint Adventures forums. The story is told extremely vaguely by members theorizing about the nonexistent future of the story, based on events that never took place. It was quickly pointed out that the haphazard summing-up of events that can occasionally happen on TV Tropes makes it the perfect venue for detailed discussion of the comic. Actually, it's probably better summed up as Just For Fun. Defictionalization has occurred as Andrew put a cameo of a letter addressed to Brinner in Homestuck.