Literature / The Quest for Karla
aka: Tinker Tailor Soldier Spy 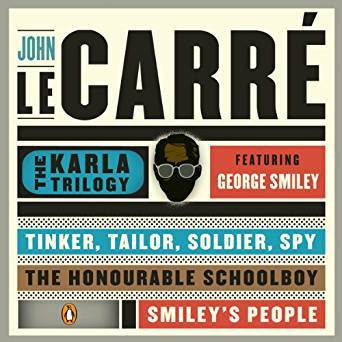 “It's the oldest question of all, George. Who can spy on the spies?'
"I've got a story to tell you, it's all about spies. And if it's true, which I think it is, you boys are gonna need a whole new organisation..."
— Ricki Tarr, Tinker Tailor Soldier Spy
Advertisement:

One of the finest spy trilogies of all time, John le Carré's The Quest for Karla (otherwise known as Smiley Versus Karla) are three spy novels set during the Cold War. They're part of a longer, loosely-knit series of books featuring British Intelligence officer George Smiley, with the trilogy covering his long battle with Russian spymaster Karla. Dealing with betrayal, love and the often mundane nature of spying, it asks awkward and painful questions about keeping secrets from your friends, lovers and indeed yourself.

The series consists of three books published between 1974 and 1979. These are: