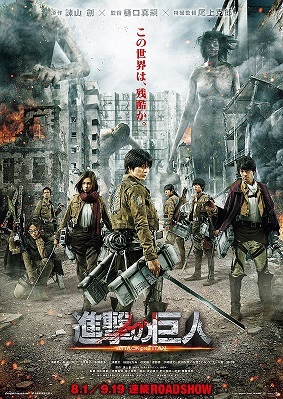 "If we fail now, it will be the end of humanity."
— Armin Arlert
Advertisement:

As one of the most popular anime and manga series of The New '10s, Hajime Isayama's Attack on Titan (進撃の巨人, Shingeki no Kyojin) has become the head of a franchise that now includes a Live-Action Adaptation. This Toho Studios film was directed by Shinji Higuchi with music by Shiro Sagisu and released in 2015 as two films, each an hour and a half long: Part 1, simply called Attack on Titan, and Part 2, called Attack on Titan: The End of the World. The biggest change, apart from the Compressed Adaptation, was a smaller cast with many characters Adapted Out or combined, though some new characters also appear. The film was shot in Japan, starring an all-Japanese cast, different from the anime voice cast, though the Funimation English dub saw the English-language voice actors reprise their roles. The two movies also spun off a short web series, Attack on Titan: Counter Rockets starring the same cast as the movie.

♫ Don't you let your heart grow numb to everyone
Oh child, listen to the sound of silence
Saving someone else means saving yourself
It's true, and I'm sure you know it too... ♫