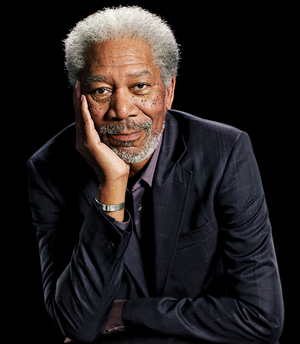 "It was an honor to be portrayed by the golden-voiced Morgan Freeman. That man could read the phone book and make it sound interesting. (reading from a phone book) '5-5-5, 3-4-9-2'. Mmmm... just listen to that rich molasses."
— Vitruvius (voiced by Morgan Freeman), The LEGO Movie
Advertisement:

You are now reading this entry with my voice, in your head. Well my my, isn't that something.

Morgan Freeman (born June 1, 1937 in Memphis, Tennessee) is God note After George Burns stepped down from the role. His distinctive and authoritative voice and his calm, measured tones lend dignity and gravitas to everything he says. And yes, we DO mean everything. See the page quote if you don't believe us. The comforting qualities of his voice are only equalled by Stephen Fry (and maybe David Attenborough). Watching them have a conversation in a blues club

is exactly as awesome as it sounds.

The quintessential Magical Negro actor, Freeman is probably best known for his roles as God in Bruce Almighty and Evan Almighty, Lucius Fox in The Dark Knight Trilogy, and was the narrator of March of the Penguins and the The War of the Worlds remake. Other well-known roles include in Driving Miss Daisy, Glory, The Shawshank Redemption, Unforgiven, Se7en, and Million Dollar Baby, for which he won the 2004 Oscar for Best Supporting Actor. Considering he spent years trying to live down his roles of "Easy Reader" and "Vincent the Vegetable Vampire" on The Electric Company (1971), he's not complaining. He also played the President of the United States in Deep Impact and Angel Has Fallen, and South African president Nelson Mandela in Invictus. (Interestingly, South Africa is also the setting of his only directorial effort to date, 1993's Bopha!). Since early 2010, he has performed the voiceover spiel in the open of the CBS Evening News, replacing a 2006 spiel done by Walter Cronkite, who died a few months prior. He is also voice of Visa in the commercials, most notably those done for the 2008 Summer Olympics, the 2010 Winter Olympics, the 2012 Summer Olympics, and the Super Bowl. He's the host of Through the Wormhole on The Science Channel, a show which hopes to tackle some of the greater mysteries of life and existence. If anyone can explain it, it's Morgan Freeman. See this

◊ for a good summation of his career.

He also participated in Ken Burns' documentary The Civil War, voicing Frederick Douglass and several other Black writers of the era. He also lent his golden voice to The LEGO Movie as Vitruvius, which is his first and only non-narrator voice-over role in an animated film to date. He also executive-produces the 2014 CBS Government Procedural series Madam Secretary.

He was the "voice" of Disney's The Hall of Presidents attraction during the Barack Obama years.

xkcd comic, as well as this

parody of The Man Your Man Could Smell Like. According to Joe Loves Crappy Movies, even the guys want him

Not to be mistaken for a relative of Gordon Freeman, as awesome and bearded as they both are. (By proxy, John Freeman is also out.) Neither so with Robert Freeman, as much as they fit the description of a Cool Old Guy. Nor with Martin Freeman, although seeing these two actors in same film playing long lost relatives would be awesome (What? It's not like that sort of thing hasn't been done before). Nor with Crispin Freeman. Nor with Milton Friedman

, although having Morgan Freeman read some of his works would make them a lot easier to get through.

John Doe goads Detective Mills into killing him after murdering his wife and his unborn baby.

Example of:
Strike Me Down with All of Your Hatred!

John Doe goads Detective Mills into killing him after murdering his wife and his unborn baby.