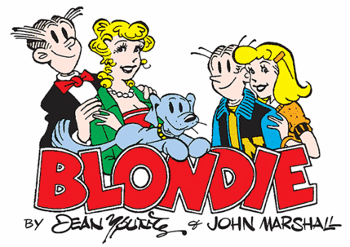 One of the longest-running (since September 8, 1930) and most popular Newspaper Comics of all time, and still fairly funny even after more than nine decades.

Blondie centers around Dagwood Bumstead, a bog-standard Middle American salaryman with a strange haircut, a single button on his shirt, and a passion for food (particularly monstrously tall sandwiches). He is Happily Married to Blondie, who runs a popular delicatessen and catering establishment. The couple's teenaged children are Alexander, who mimics his father in terms of hairstyle, and Cookie, whose appearance likewise resembles her mother's. The household is rounded out by the family dog, Daisy. Other recurring characters include friendly next-door neighbors Herb and Tootsie Woodley, Dagwood's Mean Boss J.C. Dithers, Mouthy Kid Elmo, mailman Mr. Beasley, Dagwood's fellow carpoolers Claudia and Dwitzell, and Lou, who runs the local Greasy Spoon diner.

The strip was very different in its early years; Dagwood was originally depicted as a playboy and heir to the Bumstead Locomotive fortune, but was disinherited after marrying Blondie, a flapper (originally known as Blondie Boopadoop) whom his family saw as being below their class. He has since worked hard at J.C. Dithers & Company (currently as the construction company's office manager) to support his family. 90 years have severely eroded the original Fish out of Water aspect of his character, and the strip as a whole is pretty much a Slice of Life comic at this point, its characters having been stuck at the same age since the early 1950s.

Blondie's creator, Murat "Chic" Young, continued to write and draw the strip with the help of various assistants (including Alex Raymond) until his death in 1973, after which his son Dean took over, also in collaboration with a succession of assistants (currently John Marshall, previously Jim Raymond and Stan Drake among others).

Derivative works include a series of comedy films (and long-running radio series) starring Arthur Lake and Penny Singleton, two single-season sitcoms (produced in 1957 and 1968), and two animated TV specials in the late '80s (from Marvel Productions, who had earlier collaborated with King Features on Defenders of the Earth), with Loni Anderson and Frank Welker voicing Blondie and Dagwood.

Not to be confused with the band.