The Character Page for Twitch Plays Pokémon Prism. For a directory of all character pages, as well as characters shared between runs, see here.

Cyan
The protagonist of the run, and the daughter of Lance. Yes, that Lance.
Advertisement:
KKKKKKK
The rival. Said to be a member of the KKK.
Lance
Cyan's dad and the reigning champion

𝕸𝖞𝖑𝖊𝖘 𝖙𝖍𝖊 𝕲𝖗𝖊𝖆𝖙
An NPC in the town of Phlox with delusions of grandeur, who quickly became a copypasta.
Advertisement:

The Team as a Whole
I!C

Cyan's starter was an unnamed female Larvitar, christened "Leervitar" or "Lazertar" due to her use of Leer (in a Call-Back to Crystal's starter, Lazergator). She outgrew this tendency, however, and evolved to Pupitar early on Day 2 and to Tyranitar on Day 7.
lMmMMLLIR

A male Ralts captured early in the game. The chat wanted to evolve him to Gallade in order to have a Cut user, but managed to get a Cut user into the party before he could even evolve to Kirlia, which he eventually did on Day 3. Given his separate evolutionary line, a chat war erupted as to what he should become. They eventually decided on Gardevoir, giving him a Rare Candy on Day 4.
YYYYXOOOOO

YYYYXOOOOO the Azumarill (Y4, YO, GOLDEN)

A female Marill caught early in the game. Evolved into Azumarill on Day 3. In the later portion of the run, the Mob used a new Pokeball called the Shiny Ball on a random Koffing. They succeeded in capturing said Koffing, but not without some side effects. Azumarill ended up turning Shiny, her gender was changed to male, and her ability was changed. Eventually, the devs did some debugging and returned her to female and with her original ability, but keeping her shiny.
Advertisement:
Ampharos

A male Mareep captured early in the game. The first evolution of the run, evolving to Flaaffy late on Day 1. He later evolved into Ampharos on Day 4.
FFFEEEF

A female Vulpix captured on Day 1, it evolved a few days in after the chat got lucky and mined a Fire Stone from a cave wall.
EEEE

A male Buneary captured on Day 2. Because none of the initial party could use Cut, Quick Wave was deposited early on Day 3 and Engarde was added to the party.

The first capture of the game, a female Taillow. Was deposited on Day 3 to make room for Engarde, since none of the team could learn Cut.
BBBBBBBBKT

A Rhydon captured on Day 8. It was a fixed encounter on the map, which means it was probably hard-coded to always be shiny, similar to the Lake of Rage Gyarados in Crystal.
ZQQQQPhgh

A Koffing caught in the Shiny Ball, turning it shiny and inadvertently turning Y4 shiny too...as well as turning her male and changing her ability.

Shy Larvitar
A Larvitar met in the tutorial area, introducing the concept of playing as the Pokémon. May be a love interest for I!C.
Butterfree

A Butterfree whose child went missing in Laurel Forest, or "PMD Forest" as the chat called it. He briefly joined the party in order to look for it.

As with most fangames, Pokemon Prism comes with its own set of Fakemon legendaries.

A group of four Legendary Pokemon that the Pallet Patrol intended to awaken. Unlike most known legendary Pokemon, these four are absolutely vicious and have been known to kill anyone they deem unworthy to approach or summon them. The run ended before all of them could be encountered, leaving some as The Unfought.

The Needle Pokemon. Deep within Aqua Mines dwells Libabeel, a lion-esque Pokemon with metal armor adorning its body and a scorpion-esque stinger tail. I'm afraid that's all we know, gentlemen.

The Jiu-Jitsu Pokemon. A Fakemon found inside what has come to be known as Nascour Cave. Fambaco is a strange chimera-esque creature with the head of a boar, but the body of what appears to be a white-feathered Blaziken. It appears to be a Fighting type, given its combat pose. The Mob fled from it before any more information could be gathered. 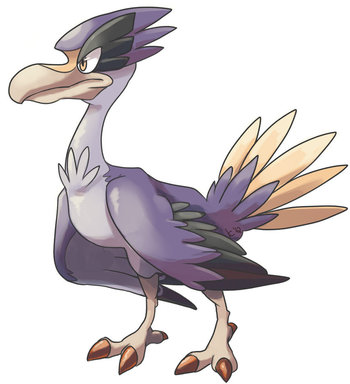 The Glitchbird Pokemon. Returning from Anniversary Crystal and Brown is this mysterious bird Pokemon which appeared at the end of both runs. Within the Haunted Mansion of Rijon is a portal that leads to a horrifying, glitched world. The bird appeared and teleported away. The Mob gave chase until it finally battled them, revealing its true identity as Phancero, a gigantic raven whose very existence defies the laws of reality as we know them. The Mob killed it, but were forced to start over again. It was eventually caught in the Master Ball.