This page details the Unkindled and the major characters of the plot. Head back through here for other character pages. Unmarked spoilers ahead.

Ashen One / Champion of Ash / Lord of Hollows 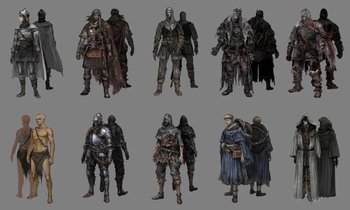 Wake up and smell the ashes.note From top left: Herald, Mercenary, Assassin, Pyromancer, Warrior, Deprived, Knight, Thief, Cleric, and Sorcerer
"Nameless, accursed Undead, unfit even to be cinder...and so it is, that ash seeketh embers."
Voiced by: Grant Gillespie (Male) / Alice Henley (Female)

You, the Player Character. At some point in time, you tried to link the fire, but failed, becoming an Unkindled. Now, as an Undead, you awake from your grave in the Cemetery of Ash and make your way to Firelink Shrine. Once there, you are charged by the Fire Keeper to return the missing Lords of Cinder to their thrones. 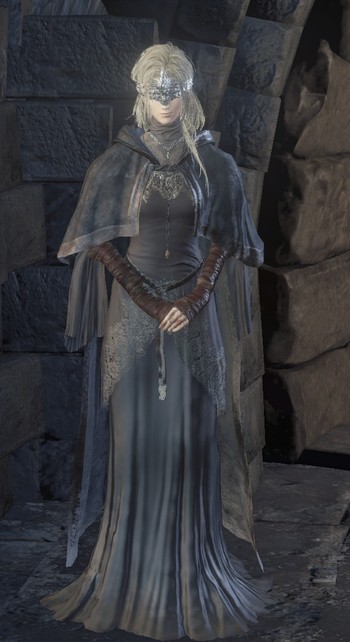 May the flames guide thee.
"Welcome to the bonfire, Unkindled One. I am a Fire Keeper. I tend to the flame, and tend to thee. The Lords have left their thrones, and must be deliver'd to them. To this end, I am at thy side."

The current Fire Keeper of Firelink Shrine. Empowers the Unkindled with the strength of any souls they acquire. 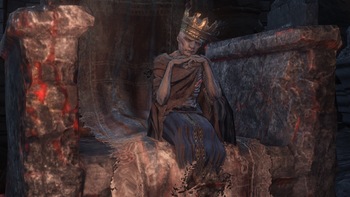 "I may be but small, but I will die a colossus."

An Undead who linked the fire in an age long past, Ludleth is the only Lord of Cinder to arrive at Firelink Shrine without a fight. After giving him the Transposing Kiln, he assists the Unkindled by turning boss souls into weapons, spells, and equipment. 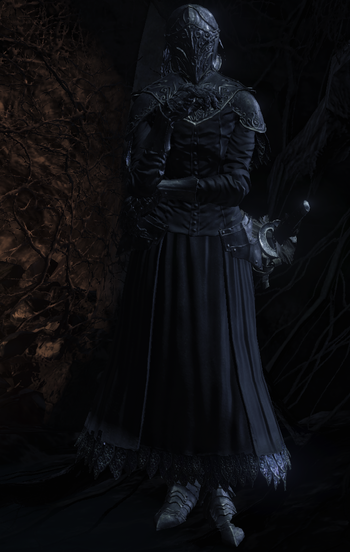 "Thou'rt a Lord, art thou not? Bearer of the dark sigil, and our Lord of Hollows. For the time thou remain'st our Lord, we of Londor shall serve thee. And I, of course, am also thine."

One of three maidens who founded the Sable Church, who appears after Yoel has bestowed five Dark Sigils upon the Ashen One. She is actually a member of the Darkwraiths, and is manipulating events in order to create a Lord and Lady of Hollows. 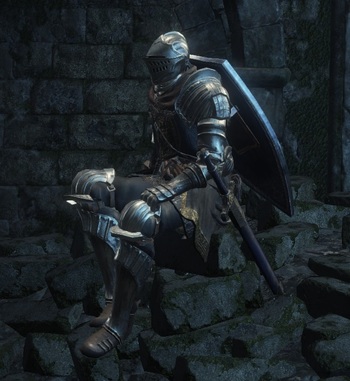 "Ahh, you are brave indeed. To face your duty alone. I would do well to learn from you. May the flames guide your way."

A knight from fallen Astora, or so they claim to be, on a divine quest to slay the Lord of Cinder Aldrich. Anri will assume the opposite sex of whatever gender the Ashen One is. The reason for this is because, behind the scenes, Yuria is pulling strings to mold them into the Ashen One's spouse.