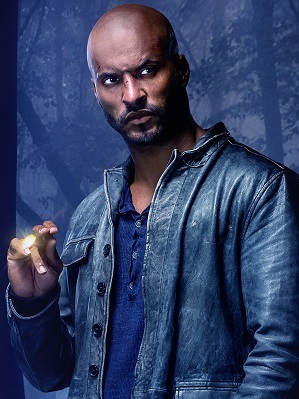 "I feel like there's a fucking axe hanging over my head."
Portrayed By: Ricky Whittle, Gabriel Darku (young)
"Best thing, only good thing about being in prison, is the relief. You don't worry if they're going to get you when they already got you. Tomorrow can't do anything today hasn't already managed."

Shadow was about to finish three years in prison and come home to his wife, Laura — until with three days to go, Laura is killed in a car accident. Now adrift and with no one to turn to, Shadow is approached by a grifter calling himself Wednesday, who needs a bodyguard and errand runner. But since he reluctantly accepted, Shadow's been seeing all kinds of unexplained things — and he's not sure if he's going crazy, or if the world truly is more bizarre than he was led to think. 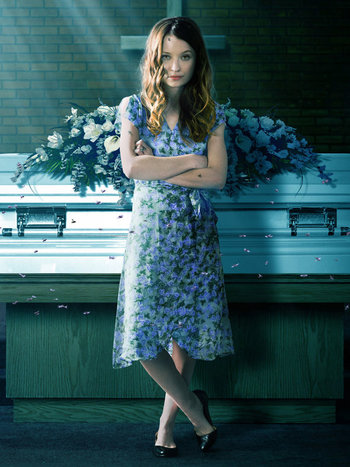 Shadow Moon's wife. In life, she was an apathetic and nihilistic woman suffering some kind of depression, who seemed to only love her husband like a pet — even to the point of calling him Puppy. Her boredom with their lives drove her to talk Shadow into robbing the casino she worked at, which cost Shadow three years of his life in jail. Her death is ultimately what kicks off the plot — and then she came back. Sort of — now she's essentially an animate corpse, able to move, talk and think, but slowly decomposing, and she's looking for a way to come back, for real. 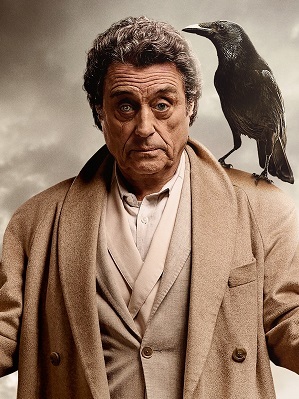 "Damn right I'm a hustler! Swindler, cheater, and liar. That's why I need assistance."
Portrayed By: Ian McShane, Tom York (young)
Shadow: Who are you, really?
Wednesday: You wouldn't believe in me if I told you.

A con artist and grifter, who happens to also be the Norse Old God Odin Allfather. But no one sacrifices to him anymore, he's forgotten save in history and lore, and so he lives as a grifter, sneaking money wherever he can. But his latest task is to rally the Old Gods — War is coming, thanks to the New Gods, and the Old Gods may find themselves wiped out unless he can get them together. 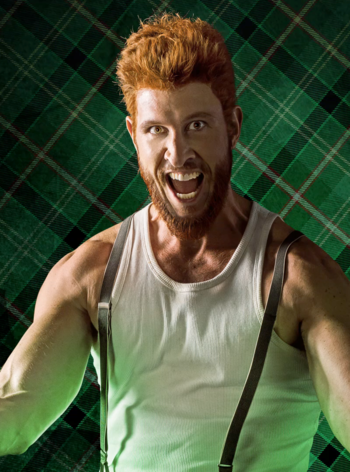 Portrayed By: Pablo Schreiber
Essie: You have done me many a good turn.
Mad Sweeney: Good and ill. We're like the wind. We blows both ways.

Sweeney calls himself a leprechaun, despite being over 6' tall. Wednesday hired him to put Shadow to the test as a bodyguard, and... other odd jobs. Too bad his love for coin tricks led Sweeney to drunkenly give Shadow the Golden Sun coin, the source of Sweeney's good luck, now made rotten. Too bad it's also the coin that's animating Laura, and Laura's not going to give it to him. Now he figures the only way to get the coin back — is to bring Laura back, for real.