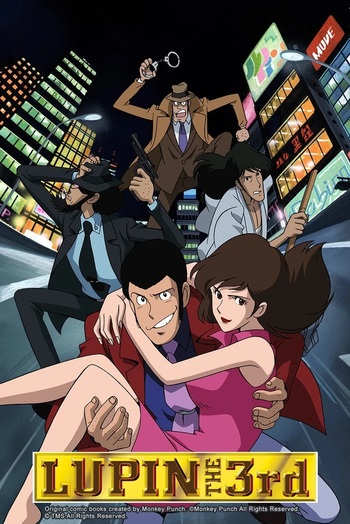 LUPAN THE THIIIIIIIIRD! note Lupin in the middle, along with this series' version of Goemon, Fujiko, Jigen, and Zenigata.
Advertisement:

The second Lupin series, a Revival of the televised anime after the success of Lupin III (Green Jacket) in reruns. The series begins by acknowledging the gap between the two series, as well as reusing the main villain from the first episode, but remains episodic with almost no mention of past episodes. The art style is significantly different from the first series, and undergoes a few shifts of its own. But those take much longer to happen than the abrupt change in direction that the first series experienced. Another major difference is that while the first series was largely set within Japan, the second series has a visibly international focus with the characters travelling all over the world.

Instead of being a typical 12-13 or 24-26 episode season, TMS Entertainment chose to make the series "open-ended", meaning a brand new episode of Lupin once a week, every week, for the whole year.note  This no-reruns style had already started to become common on Japanese television, with Sazae-san having used it since 1969, and Astro Boy using it during its four-year run back in the 60's. The series only missed three weeks (due to preemptions from New Year's programming and coverage of the 1980 election

) , airing 155 episodes in a row. That's three years, out of which there were six seasons of between 25 and 27 episodes apiece (they're marked by changes in the opening and ending). This series' longevity, coupled with its popularity, made it into essentially the "baseline" for all future entries into the Lupin franchise.

This era also saw two Lupin theatrical films: 1978's The Mystery of Mamo (which has a tone more in line with the "Green Jacket" era) and 1979's The Castle of Cagliostro (the first feature film directed by Hayao Miyazaki). While Mamo was a success, Cagliostro flopped upon its initial release in Japan, only to be Vindicated by History years later.

The first English-language release of "Red Jacket" came from the Streamline Pictures dub of the two episodes directed by Hayao Miyazaki (#145 and #155), released under the title of Lupin III: Tales of the Wolf. Streamline's Lupin videos were required to censor Lupin's name due to the estate of Maurice Leblanc (the original creator of Arsène Lupin) constantly threatening TMS with legal action.

Nearly a decade later, Geneon licensed the series and released it under the title of Lupin the 3rd, dropping "New" from the title.note  It's worth pointing out that the credits at the end of every Geneon Lupin DVD explicitly refer to the series as "Lupin III Part II". [adult swim] picked it up, but only aired 26 episodes out of the first 30. In all, Geneon managed to dub 79 episodes – a little over half – and get them out on DVD before dropping the series. Episodes 80-144 and 146-154 would not see wide release in North America until Crunchyroll began streaming the episodes with subtitles in December of 2015, which was followed up by an announcement that Discotek Media would begin releasing DVDs of the entire series starting in 2016, using any English dub available and better subtitles for episodes 80-155 (as Crunchyroll's subtitles are emblematic of the general low quality of official internet-produced subs).

The cast is fully formed: Goemon is a Lupin ally, Jigen is Lupin's trustworthy partner, Fujiko is as likely to help Lupin as betray him, and Zenigata is determined to chase after him. This series highlights Zenigata's need to chase Lupin rather than actually arrest him. Even when Fujiko is working with the police to capture him, Lupin still seems to stymie their forces.

This show is also notable for being the first anime to be broadcast in stereo - although only certain episodes, starting with episode 99.

Some years after this series ended, TMS tried to revive Lupin again. The result was Lupin III (Pink Jacket).

This Anime series contains examples of: