For general tropes associated with the regular cast, you can find their page here: Lupin III.

open/close all folders
Mister X
Japanese: Junpei Takiguchi (1971-1979), Chafurin (2018)
Mister X is one of the most prominent members of his rogue's gallery. He is the wealthy commissioner of The Scorpion Crime Syndicate, who has a massive grudge against Lupin III and Fujiko Mine.For his tropes, see his page at: Lupin III: Part 1.
Advertisement:
Phantoma Mark III
Japanese: Junpei Takiguchi
English: Tom Wyner

Phantoma Mark III is another recurring member of Lupin III's rogues gallery, nursing a grudge against the thief ever since Lupin thwarted his plans to inundate the world by melting the polar ice caps and then enslave any survivors to build his new empire.

A Scottish Mad Scientist who abducted Fujiko in an attempt to capture Nessie.

Neto is the police chief of Rio who is very friendly, he is also the prison warden. 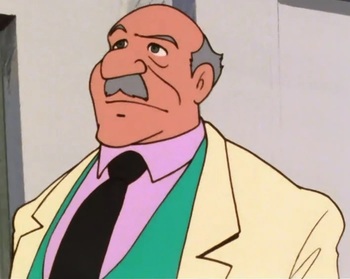