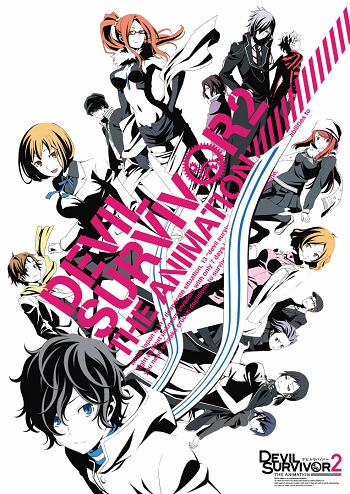 of the sequel to Devil Survivor, Devil Survivor 2: The Animation follows Hibiki Kuze, an Ordinary High-School Student who gets thrust into a conflict between humans, demons, and Eldritch Abominations from the stars above.

He is first introduced to Nicaea, a "dead face delivery site" (in beta) that can show users other people who will die in the immediate future via videos, by his friend Daichi Shijima. Later on, they go to the subway and look up the newest video from Nicaea.

The video is a high quality depiction of a train crash in the same tunnel, with their videos depicting each other's deaths.

In a rush, they attempt to leave the station, but fail. Fortunately, they are saved by Nicaea and are allowed another chance to live. They team up with Io Nitta, a fellow high school classmate, to help fight against the aliens known as the "Septentriones". They also meet others and make friends along the way, including those from the shady JP's.

the manga writer (where the anime takes its storyline from) was Makoto Uezu.

Note that the adaptation may contain some spoilers from the original game, so beware.

In addition to those from the main page, DeSu2: The Animation provides: