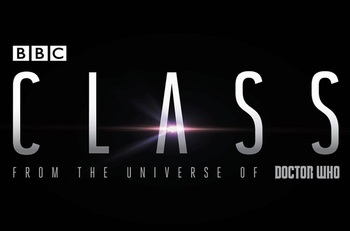 Class is now in session.
"I can travel through space, and I can travel through time, but I can't always be there when you need me. Sometimes, you have to take survival upon yourselves. What will you do when the shadows come, and you can't turn away? For the darkness ahead. For time has looked at your faces... and time never forgets."
— The Twelfth Doctor, "Time Never Forgets" teaser

Class was a short-lived spin-off of Doctor Who, and a part of the Whoniverse. Its first two 45 minute episodes (of eight) premiered on BBC Three on October 22nd, 2016.

The story revolves around a group of sixth formers at Coal Hill School, as they deal with typical teenager issues: relationships, school life, monsters from space attempting to destroy all of existence...

Also one of them is an alien (Charlie), as is their teacher, Ms Quill.

After the Shadow Kin exterminate the whole Rhodian and Quill races, the Doctor rescues the Rhodian prince and his captured-enemy-turned-slave and sends them to live in secret at Coal Hill Academy as student "Charlie Smith" and teacher Miss Quill, keeping their identities secret from their classmates.

Until the Shadow Kin invade their sixth form prom.

It turns out that the Doctor traveling through time again and again has made the walls of space and time stretch thin around Coal Hill, to the point where they are about to burst. As such, who knows what might take the opportunity to slip through next...

The show set out to become a "British Buffy", albeit with a sci-fi twist on the formula. But alas, things ultimately would not turn out that way. In June 2017, after the completion of the first series, Patrick Ness announced that he was quitting the show, citing disappointment with how the BBC was handling it. And in September the same year, after a prolonged period of radio silence, the BBC would quietly announce what many viewers had already suspected, namely that the show would be cancelled after just one series.

Three tie-in novels were released alongside the first series.

In May 2018, it was announced that Big Finish Productions would be releasing audio dramas based on the series, which currently compromise two three-story boxsets set during the first series released in August of that year. The original cast reprised their roles alongside Sophie Aldred as the Seventh Doctor's companion Ace. Two more boxsets were announced for 2020, this time with two of the regular roles being recast with Joanna McGibbon taking over the role of Tanya and Dervla Kirwan as Miss Quill. It is not yet known whether any of Ness' planned storylines for Series 2 will be adapted for the audio dramas (see the "What Could Have Been" section under "Trivia").

You can view the trailers here: Class First Look Teaser