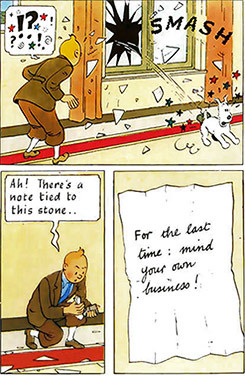 When it comes to intimidating someone, a common method is to break a window. The message a smashed windowpane sends is clear: someone doesn't want you in their town, and if you don't pack your stuff and go, something more precious than a window might get broken next.

Although the broken window on its own is often enough of an Implied Death Threat to get the point across, a common variation is to throw a rock, brick or other heavy object with a message tied to it in order to spell things out more explicitly. Or, in another variation that's Played for Laughs, a completely mundane and non-threatening message.

See also Enter Stage Window, which can include throwing rocks at someone's window to get their attention in a non-threatening way, Broken Glass Penalty, when a window is broken by accident during a sports game, Destination Defenestration, when a person gets thrown out a window, and Super Window Jump, when a person throws themselves through a window.

Not to be confused with a sign warning people to watch for shards of glass around a recently broken window. Or an error message on a Windows computer. Contrast Defiant Stone Throw.

Sister Trope to, and sometimes combined with, Dead Animal Warning.