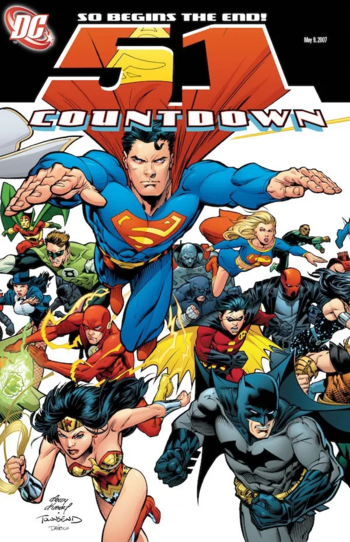 Countdown to Final Crisis (2007–2008) was a 51-issue weekly series, written primarily by head writer Paul Dini and a rotating roster of writers consisting of Justin Gray, Jimmy Palmiotti, Tony Bedard, Adam Beechen, and Sean McIver, initially meant as the leadup to Final Crisis for which it was named. However, much of the events were retconned or ignored after the book’s negative reception.

The Multiverse has gone wonky. The Monitors have come back into existence with the return of the parallel universes, and they foresee a "Great Disaster"—and one Monitor, consulting The Source, is told that Ray Palmer (currently in self-imposed exile since the events of Identity Crisis) is the answer. From here, the script splits into a variety of plot threads:

The plot threads often overlapped as the result of the search for Ray Palmer, with heroes of one thread waylaid by villains of another, which resulted in a lot of multi-sided battles and several assassination attempts before Darkseid, The Monitors, Monarch, and Superman-Prime start slaughtering characters en masse. Multiple other plot points were also introduced, but these were resolved in other titles, as well as multiple spin-offs.