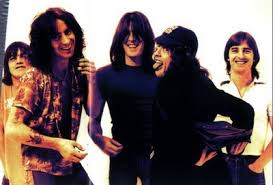 Perhaps no band in rock history embodies Hard Rock quite like AC/DC. Since their formation in Sydney, Australia in 1973, AC/DC have gone on to define the style with their tight, concise attack of heavily Blues-influenced rock & roll, that helped form the bedrock of Heavy Metal. They’re still one of rock’s preeminent party bands—with their songs about partying, drinking, rocking, loose women, and getting through the bad times—and the boys have been through more than their share of the latter.

The word "AC/DC" was originally seen by the sister of guitarists Angus and Malcolm Young, Margaret Young, on her sewing machine of all things, and it’s an abbreviation for "alternating current/direct current," meaning the appliance can use either type of electrical current for power rather than just one or the other.note Wall sockets in people's homes provide AC, but most household appliances and electronics require DC, which is why that blocky AC adapter in the power cord is necessary. She thought it made for a good band name and suggested it to her brothers, who agreed and used it henceforth. (The band didn't learn that it was a euphemism for bisexuality until much later in their careers, much to their amusement.) The center of the band, at the beginning, was brothers Angus Young and Malcolm Young (on lead and rhythm guitar, respectively), with vocalist Dale Evans, bassist Larry Van Kriedt and drummer Colin Burgess. As the band quickly moved away from their glam beginnings, the lineup shifted numerous times. Over the years, Angus Young - one of the most iconic guitar players in rock, with his famous schoolboy outfit and duck-walk - has been the most consistent member of the band, followed closely by his brother Malcolm until he left the band in 2014 for health reasons.