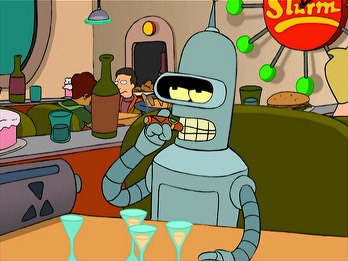 He needs the alcohol for powering his batteries.
The cigars make him look cool.
"Whoever put her together made her a little too realistic... Who wants a weapon that sulks!?"
— Junpei, Persona 3: The Answer
Advertisement:

Robots in television — particularly comedic television — are usually human-like in ways that very few sane programmers would deem useful. It can be something as simple as being philosophical (wanting to understand human emotion, wondering if they have a soul, etc.), but can extend to such things as robot social cliques, robot food, robot entertainment, robot religion, and even robot sex. It doesn't matter if it makes no sense in the context of a mechanical servant, or even if it's truly undesirable, the designers have put it in there for some twisted reason. This will often take the form of having a robot that looks exactly like a human.

The degree to which this is actually "ridiculous" varies depending on the setting. In some cases they get a free pass — it may be that an intelligence, artificial or not, needs to be vaguely human-like in its basic outlines, with emotions, interests, motivations, et cetera simply to be functional for certain tasks, such as those requiring a great deal of long-term autonomy. It may be that robots need to think like humans to understand human concepts such as ethics and morality, and thus refrain from — to quote Dwarf Fortress players — Fun activities such as trying to turn all matter in the Universe into paperclips. It may be, if human intelligence itself is merely an evolved set of functions held together in an evolved psychological architecture, that any society with sufficiently ubiquitous and flexible automation will necessarily have the means to produce something human-like. It may be that emotions, desires, and curiosity are unavoidable side-effects of full sentience, or it may simply be that humans prefer Sexbots not to behave like automated teller machines. Whatever serves the needs of the well-reasoned plot or setting. In these cases, Ridiculously Human Robots make sense.

However, it's rare that a series explicitly spells this out, as, ultimately, most authors and worldbuilders adopt this trope because a few illogical design choices are a small price to pay for keeping robotic characters out of the Uncanny Valley. In fact, these human-like AIs are often put right up next to similar, yet seemingly emotionless equivalents that function perfectly.

A corollary to this is that robots are comfortable in their own oddball version of society, and consider human conventions bizarre and silly. You'd think they would be programmed to be familiar with human behavior, and find it perfectly normal. Robots from places without humans, who are exempt from this complaint, curiously tend to adapt to human customs faster.

For an alternative, see Pick Your Human Half. Interestingly, there will usually be at least one character (or society in general) who insists it's "Just a Machine".

See also Instant A.I.: Just Add Water!, Super-Powered Robot Meter Maids, Fembot, Ridiculously Alive Undead, and Robot Girl. Compare and contrast with Artificial Human, Robot Me, or Mechanical Lifeforms. The more human-like ones are sometimes an Eating Machine and may indulge in Robo Romance. May become subject to a Robotic Reveal if the robot looks ridiculously human enough to pass as one. Expect the reveal to have some squick if it's done via means like an Unusual User Interface. Contrast Deceptively Human Robots, for when the apparent humanity is only skin deep. Also contrast Mechanical Monster, where it is completely inhuman in both psychology and appearance. The inverse on nearly every level of Cybernetics Will Eat Your Soul. Contrast Forgot He Was a Robot and Starfish Robots.