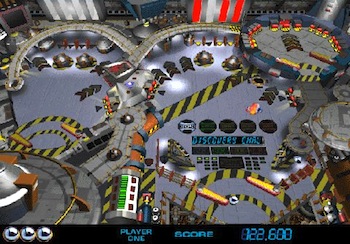 Good luck finding this at your local arcade.
Advertisement:

On this wiki, "Digital Pinball Table" refers to a Pinball game that exists only as software, usually running on Video Game Systems or home computers. Many digital pinballs are characterized by their use of gadgets and gimmicks that cannot exist in a Real Life pinball machine, such as monsters that wander the playfield, teleporting balls, or modes that abruptly change the rules of physics.

Digital pinball tables and games with their own pages:

Other notable digital pinball tables include: