Literature / Harry and His Bucket Full of Dinosaurs 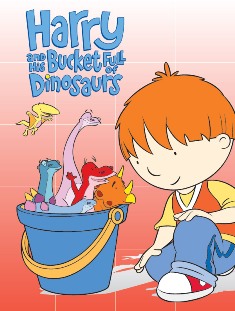 Harry and His Bucket Full of Dinosaurs is a series of children's books written and illustrated by British authors Ian Whybrow and Adrian Reynolds about a 5-year-old boy named Harry, who always carries with him a bucket with six toy dinosaurs that he found in his attic one day. The six dinosaurs are a Tyrannosaurus, a Triceratops, an Apatosaurus, a Pteranodon, a Scelidosaurus, and a Stegosaurus. While Harry regularly interacts and plays with the dinosaurs, they only appear to be toys to everyone else, most prominently Harry's mother and grandmother, his best friends Charley and Jack, and his teenage sister Sam. The first book, simply titled Harry and the Bucketful of Dinosaurs, was published in 1999, and was followed by 13 other books originally published until 2007.

In 2005, the books were adapted by the Canadian television company CCI Entertainment as a 52-episode animated Preschool Show that originally aired on Teletoon in Canada, Channel 5 in the UK, and Cartoon Network's ill-fated Tickle U block in the United States. In this Animated Adaptation, Harry's bucket functions as a portal to another universe called DinoWorld, which Harry can enter by jumping into the bucket. There, his toy dinosaurs become real dinosaurs he goes on various adventures with. Another notable difference between the books and the cartoon is that the dinosaurs are now given proper names rather than simply being referred to by their species. The cartoon ended in 2008, but reruns continued on Treehouse TV in Canada (where the show was moved to for its second season) and on Qubo in the US.

In 2011, Ian Whybrow brought back Harry and his dinosaurs with a series of junior chapter books, in which a now school-aged Harry is reunited with the original six toy dinosaurs after having stopped playing with them when he started to feel he was too old for them. This time however, Harry also has a set of plastic dinosaur cards on his key ring that he can use to summon additional dinosaurs to help him and his friends. Whybrow even published a 15th entry to the original series in 2012 to celebrate the return and rebirth of the series.

Harry and His Bucket Full of Dinosaurs provides examples of:

Alternative Title(s): Harry And His Bucket Full Of Dinosaurs