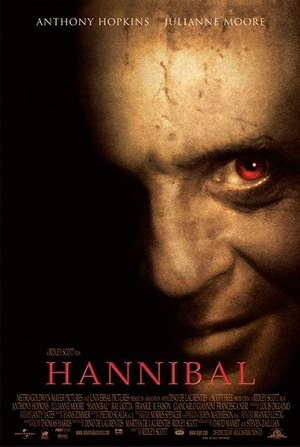 Hannibal is the 1999 sequel to the bestselling Thomas Harris novel The Silence of the Lambs, and the third novel in the Hannibal Lecter series. A movie adaptation, directed by Ridley Scott, came out in 2001.

Seven years have passed (ten in the film) since Hannibal Lecter's escape from custody. Clarice Starling is now a fully-fledged FBI agent, but a bungled drugs raid leads to her being suspended. Meanwhile, Lecter is living in Florence, pursued by Starling, a wealthy former victim, and a disgraced Italian police detective - in different ways for different reasons. The book, although still acclaimed, was far more controversial with critics and readers, especially its ending.

The movie, with a different ending, saw Anthony Hopkins reprise his role as Lecter and also starred Julianne Moore, Gary Oldman and Ray Liotta. It received mixed reviews, not least because Jodie Foster decided not to reprise her role as Starling and was replaced by Moore. Both book and film, however, made a great deal of money.

The flashbacks from Hannibal involving the Verger twins were later incorporated into the second season of Bryan Fuller's TV series of the same name, with Michael Pittnote and Joe Anderson in Season 3 and Katharine Isabelle as Mason and Margot. The novel's primary story of Lecter on the run (with modifications) influenced the first half of the show's third season. Pazzi was played by Fortunato Cerlino and Will Graham, as well as Chiyoh (a character from Hannibal Rising) and Bedelia Du Maurier (a Canon Foreigner unique to the series), were incorporated into the story.