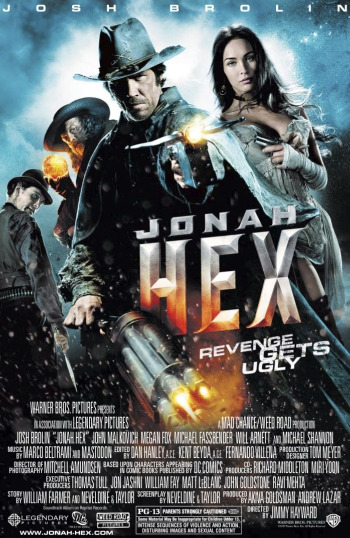 Jonah Hex is a 2010 post-Civil War anti-hero Western film loosely based on the DC Comics character of the same name. Distributed by Warner Bros. Pictures, the film is directed by Jimmy Hayward and stars Josh Brolin as the title character, Jonah Hex, and also stars John Malkovich, Michael Fassbender, and Megan Fox. The film was released on June 18, 2010.

During Grant's presidency, Jonah Hex is a remorseless Bounty Hunter. In the American Civil War he was a rebel whose honor put him afoul of a confederate general, Turnbull, who murdered Jonah's family while Jonah watched. As a result of the ordeal, Jonah's face is disfigured and he can talk with the dead. After staging his own death, Turnbull, with a group of rebel stalwarts, hatches a plan to bring the Union to its knees. Grant wants Hex to stop it. While the nation readies to celebrate Independence Day, Hex and an unlikely ally have little time to stop Turnbull and his weapon of mass destruction.

The original draft of the film was penned by the creators of Crank. It was cut down from its original running time to just over 70 minutes (to make it more action-oriented, or so the rumors say), and went over like a lead balloon.