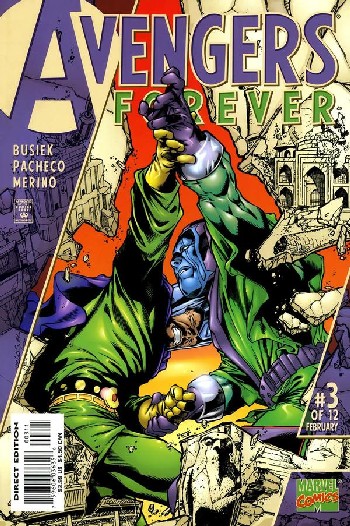 Kang and Immortus, in their forever struggle
Kang: History is not written, scholar, and neither is destiny! History is made! Made by the deeds of the strong and the brave! And destiny is forged! The historians, the students, the gray-beards - They come in the wake of the strong, and write down what the brave have done. But it is the conquerors who change the world, and it will always, always, be thus!
Advertisement:
Immortus: Conquerors are swept up in destiny's tides as surely as anyone else, Kang. And the scholars see the patterns, the truth. I have learned this, and you will, too, in time.

Avengers Forever is a twelve-issue comic book limited series of The Avengers published from December 1998 to November 1999 by Marvel Comics. The series was written by Kurt Busiek and Roger Stern and drawn by Carlos Pacheco and Jesus Merino. It has a massively complex plot, with a battle between Kang the Conqueror (a Conqueror from the Future) and Immortus (a Guardian of the Multiverse); actually, Immortus is the future self of Kang.

Let's try to make it short. Rick Jones suffers a strange paralysis, and the Avengers send him to the Supreme Intelligence of the Kree (who's held "captive" at the Blue Area of the Moon), to see if he could heal him. Immortus tries to kill Rick Jones, but Kang intervenes on his behalf. Rick Jones, with the help of Libra, uses the "Destiny Force" once more, an all-powerful force he once wielded during The Kree/Skrull War, summons several Avengers from many points of time: Henry Pym and The Wasp (from the present), Yellowjacket (Henry Pym when he had a mental disorder; yes, he summoned the same man from 2 time periods), Captain America (right after the Secret Empire storyline, demoralized by it and on the verge of giving up the superhero thing), Hawkeye (right after the Kree-Skrull War) & Songbird and Captain Marvel (Genis-Vell) (from two separate future times). The fight moves to Chronopolis, Kang's stronghold: Immortus destroyed it and turned it into the "Forever Crystal", which allows him to change timelines or destroy them at will.

The Avengers use Kang's time machine to escape into the timestream, where Immortus would not locate Rick. Not knowing what Immortus is up to, or why he wants to kill Jones, the Avengers explore 3 points of time, to no avail. Then, they visit Limbo, Immortus' stronghold, and take a Space Phantom captive. They then learn Immortus' motives: with the "Destiny Force", humanity would become a ruthless intergalactic empire. Immortus spent years manipulating human development to keep humanity confined to planet Earth, to keep the Time Keepers from destroying it, but Rick Jones' death was non-negotiable. Immortus then captures the Avengers and sends them to a trial.

The Time Keepers decide that humanity is a menace and that they should destroy most of the timelines, leaving the bare minimum needed to guarantee their own existence. Reinforced by Kang, Rick, and the Supreme Intelligence, the Avengers follow the Time Keepers to the end of time, where they are finally destroyed.