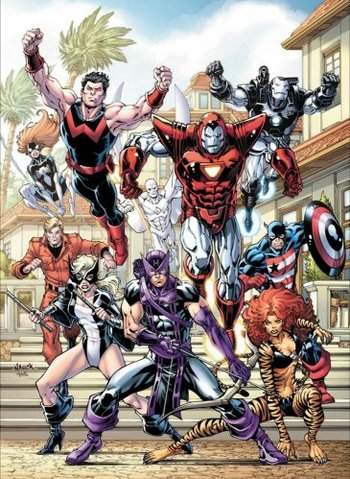 The West Coast Avengers was an Avengers group established in Los Angeles, and the first Avengers spin-off series.
Advertisement:

The Vision proposed to make this new group in Avengers #243 to expand the Avengers' influence over the country, and made Hawkeye the leader. The other initial members were Mockingbird, Wonder Man, Tigra, and the second Iron Man (James Rhodes).

The team debuted in a four-issue 1984 miniseries by Roger Stern and Bob Hall. The original plan was for the West Coast team to appear from time to time in the main Avengers book so Stern could keep the characters close when he needed them. They were also part of the supporting cast in Iron Man issues of this period. But one year later, Marvel decided to give the team its own ongoing series. It debuted in 1985 with Steve Englehart and Al Milgrom as the first creative team, and lasted until 1994. With issue 47, the title was changed to Avengers West Coast. After Englehart and Milgrom, the book was written and drawn by John Byrne, and when he abruptly quit, veteran Avengers writer Roy Thomas took over and stayed until its cancellation, when it was replaced by the Darker and Edgier Force Works.

Tony Stark was already back as Iron Man when the series debuted, so he replaced Rhodey on the team. The team roster changed a lot over the series, including but not limited to Henry Pym, Moon Knight, the Scarlet Witch, U.S. Agent, the Wasp, the second Spider-Woman, and even the Golden Age Human Torch.

Twenty-four years later, the team was relaunched with a new lineup consisting of Kate Bishop, Gwenpool, America Chavez, Quentin Quire, and a new character named Fuse, along with Hawkeye joining as the lone carryover. For tropes focusing on that series, see West Coast Avengers (2018).