Main Character Index | Baltimore Police Department | Major Crimes Unit | Homicide Unit | Police Commanders | Western District | Baltimore Underworld | The Barksdale Organization | Omar and Associates | The Greeks | The Stanfield Gang | New Day Co-Op | Courthouse | City Hall | The Baltimore Sun | Other Characters | Homeless People and Addicts | Baltimore Docks | The Next Generation
"It's the chain-of-command, baby, the shit always rolls downhill."
— Thomas Hauk
Advertisement:
"When I came on in the Eastern, there was a piece-of-shit lieutenant hoping to be a captain, piece-of-shit sergeants hoping to be lieutenants. Pretty soon we had piece-of-shit patrolmen trying to figure the job for themselves."
—Cedric Daniels

The commanders of the BPD are among some of its most competent and dedicated members... actually, no. While there are a few competent and dedicated personnel in the upper ranks, for the most part the commanders of the BPD reach that lofty status through politics, nepotism, (which is even lampshaded at one point, when Burrell says to a group of assembled commanders that "There isn't one of you here in this room that isn't here by appointment") ruthless self-serving careerism, and, above all, fixing the stats to make themselves look good. This contributes greatly to the overall dysfunction of the BPD, the ineffectiveness of the police department as a whole, and one of the show's overriding themes: institutions tend to lose sight of their original purpose and make self-preservation and the advancement of the people within them their ultimate goals. 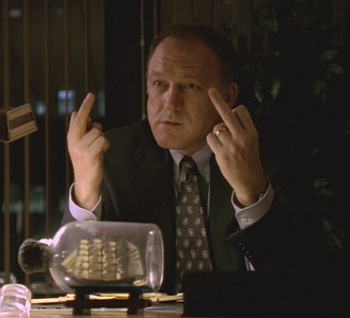 "These are for you McNulty

"
You, McNulty, are a gaping asshole.

An intelligent, hardass police commander and bureaucrat, once described by a fellow commander as "as ruthless a fuck as we have in this department." He begins the series as a major in charge of the Homicide department, and over the course of the series enjoys promotions to colonel, deputy commissioner, acting commissioner and state police superintendent. Rawls achieves this by mainly by doing everything in his power to produce good stats (murder clearances, lower crime rates, etc) — though what looks good on paper doesn't necessarily shine so bright in reality. For example Rawls is not above making an arrest that has no real prayer of producing a conviction, even though it means severely compromising a major investigation — all because making an arrest in the case, even if it doesn't lead to a conviction, gives him a "clearance" in the case and as a result the crime stats look better on paper. While serving as a colonel and deputy commissioner, he applies severe pressure on subordinate officers to bring down the crime rate. This causes most of his colleagues to "juke the stats" by reclassifying crimes, (serious crimes are downgraded to related but less serious crimes, and as a result of downgrading felonies to misdemeanors, it allows the police to claim that felonies are down overall and that there are fewer serious crimes taking place) a practice that Rawls strongly encourages without actually being explicit about it.

Rawls has no patience for insubordination, or anything that might threaten his stats. As a result, McNulty's shenanigans makes him a prime target for Rawls, and the two clash repeatedly over the course of the series. After failing to get McNulty fired during Season 1, Rawls settles for kicking him out of homicide and transferring Jimmy to what Jimmy believes is the worst unit in the Baltimore PD, the marine unit.For all his hardass ways, however, Rawls isn't all bad. He occasionally shows great competence at his job and even his animosity towards McNulty has limits. Most notably, when McNulty feels responsible for another cop getting shot, Rawls steps in to assure him that his guilt is misplaced.
Ervin Burrell
Played by: Frankie Faison 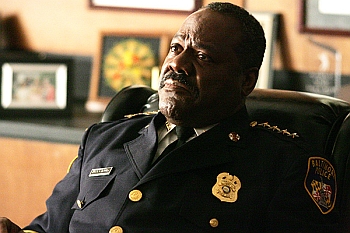 "You will eat their shit."

It's Baltimore, gentlemen. The gods will not save you.

Deputy commissioner (later, commissioner). Burrell is a career-minded officer, more skilled at playing politics than actual police administration. He proves to be a major roadblock time and again for Daniels' unit, which has a tendency to run investigations that could implicate Burrell's politically connected friends. Eventually, when Carcetti is elected mayor, his fixing of crime statistics gets him forced to retire, though he is savvy enough to make sure he gets a golden parachute. 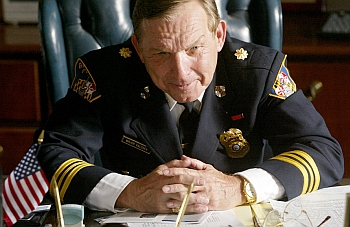 You want to do it your way, fine. But you ain't gonna use my people to fuck me.

Commander of the Southeastern district. Father-in-law of Pryzbylewski, he uses his connections to get Prez out of trouble several times. During the course of Season 2 Valchek gets into a feud with Frank Sobotka over a stained glass window, and Valchek's attempt to make the lives of the dockworkers miserable leads to the union stealing an expensive police surveillance van, and Valchek then demands an investigation into the stevedore union's finances that brings them down.

During Season 3 Valchek becomes an early supporter of Carcetti, and a key information source inside the police for the mayoral candidate. Once Carcetti becomes mayor, this results in Valchek getting a significant promotion, albeit one that keeps him away from day to day activities of the BPD. In the series finale, after Burrell has left, Rawls has been bribed with a state position and Daniels quits rather than juke the stats, he is promoted to Commissioner by virtue of being the last man standing.
Advertisement:
Commissioner Warren Frazier
Played by: Dick Stilwell

The police commissioner during the first season, an idiot boss of the highest order and totally removed from anything resembling real police work. He is offhandedly mentioned as changing jobs and going to another department in Season 2, which is what leads to Burrell becoming Commissioner. 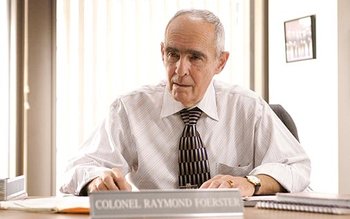 A veteran Major in command of the Baltimore narcotics division, this makes him Daniels' immediate superior at the beginning of the series. Later he gets promoted to Colonel and takes over CID once Rawls becomes Deputy Comissioner. He's relatively apolitical and uninvolved in the schemes of the police brass, even willing to openly protest Burrell trying to interfere with a politically charged case. He develops cancer and grows progressively sicker due to it until he dies during the course of season 4. 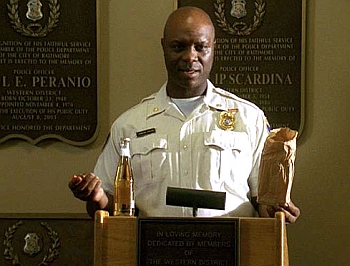 "There's never been a paper bag for drugs. Until now."
But you know what? The shit out there, the city, is worse than when I first came on. So what does that say about me? About my life?

Colvin is the Major in command of the Western District. While he's a reasonable commander who is sincerely devoted to protecting the community, he has become burned out and jaded after witnessing the corruption of Baltimore in general and its police department in particular for many years. Sick of seeing so much death related to the drug game, he comes up with the "Hamsterdam" free-zone experiment in Season 3. When his superiors finally find out and Hamsterdam causes a political firestorm, he is forced to retire in disgrace because of it.

After retiring from the police he goes on to try to rehabilitate delinquent middle school children and keep them from joining gangs. He find success in Namond Brice, whom he also adopts.
Dennis Mello
Played by: Jay Landsman 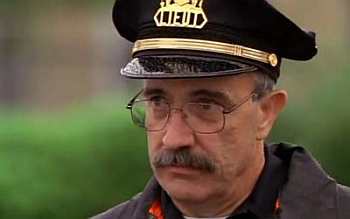 "Don't get captured."
All right. Listen up, you mutts. This is complicated. I mean, it isn't complicated if you went to college or, I don't know, your mothers actually stopped drinking for a minute while they was pregnant. For Baltimore city police, this is complicated....

Administrative lieutenant of the Western District working under Colvin, which effectively makes him Colvin's right hand. Eventually becomes commander of the Western. 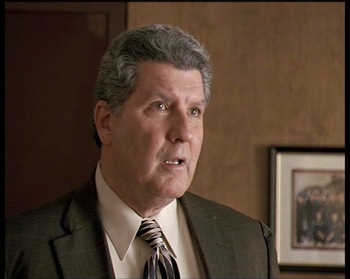 Played by: Gene Terinoni
Lester: That, Sergeant Hauk, is one of the most effective supervisors in our police department.

Lieutenant Asher is a friend of Lester Freamon's who is Lester's choice to take command of the MCU once Daniels is promoted and leaves... solely because Asher is such a hands off commander that he will let Freamon and the detectives do whatever they want. Indeed, Asher is far more concerned with his upcoming retirement and building a new beach home in Delaware than he is with anything going on within the MCU, so he will simply sign off on any papers Lester presents and then happily walk away with his head in the clouds. This comes to a screeching halt once Rawls replaces Asher with Marimow, but once Daniels becomes head of CID Asher is promptly reinstated as head of the MCU. 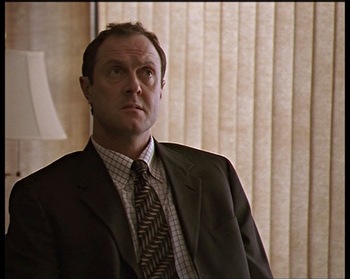 Played by: Boris McGiver
Jay Landsman: Marimow does not cast off talent lightly. He heaves it away with great force.

A jerkass lieutenant notorious for destroying units and alienating his men, he is put in charge of the MCU by Rawls specifically to break it when the MCU begins pressing corruption cases harmful to the Royce administration shortly before the election. His style of command quickly drives both Lester and Kima out of the unit, leaving Sydnor as his only actual detective, until a newly promoted Herc and Dozerman transfer in. It's not until he's replaced as head of the MCU that the unit begins to come out of its doldrums.

A major and the head of the Eastern District at the beginning of Season 3. As the mayor and the top police commanders try anything and everything to reduce the crime rate in the city to make Mayor Royce look good for the voters, Taylor becomes the target for more and more abuse from Rawls due to his inability to get a handle on the crime in his district. After multiple Comstat meetings where he is berated by Rawls, Burrell relieves him of command, pointing out to everyone else there that the same fate can befall them at any time.

Colvin gives Carver a kind, compassionate but stern speech on what it takes to be a proper cop.

Colvin gives Carver a kind, compassionate but stern speech on what it takes to be a proper cop.