Characters / The Wire - Other Characters

See the The Next Generation page.

Police in this town ain't shit!

Kima's live-in lover at the start of the series, it's implied that the two have been happily together for some time. Their relationship is not without friction, however, as Cheryl frequently worries about the danger of Kima's job and tries to push Kima towards getting a law degree, or at least working a desk job in safety, especially after Kima is nearly killed during a bust. Between Kima's return to investigative duties, a growing distance between them when Cheryl pushes ahead with having a child despite Kima's obvious but unvoiced doubts about being a parent, and Kima's infidelity, the two break up. 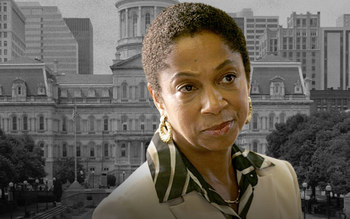 Played by: Maria Broom
The game is rigged. But you cannot lose if you do not play.

The wife of Cedric Daniels, she is an ambitious woman with a keen political eye. She spent years trying to support the career of Daniels and help guide him to the top of police hierarchy, but that fizzles out as Daniels increasingly comes to terms with the fact that he doesn't have the stomach for ladder climbing and political games and would rather dedicate himself to the job of what a policeman should be: a guardian of the city. As Cedric's ambition dies down so does their marriage, and Marla decides to live out her ambitions for herself by running in a city election when the two separate. 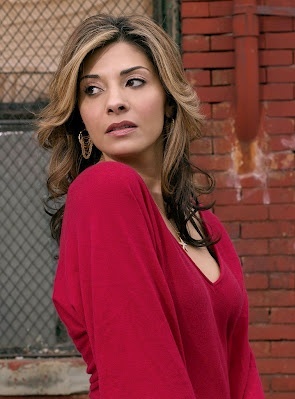 Played by: Callie Thorne
I don't trust you. I can care about you, and I can want us to be friends, and if you give me enough time Jimmy I can actually want you to be happy. But how the hell am I supposed to trust you?

A real estate agent and the ex-wife of Jimmy McNulty. They met in college, and her becoming pregnant was what prompted Jimmy to drop out of college and join the BPD. They separated before the start of the show, and season 1 finds them in the midst of a sometimes bitter divorce and child custody battle. This becomes less bitter over time, and as Jimmy gradually realizes that his efforts aren't going to result in them getting back together. In later seasons, she and Jimmy even become somewhat friendly again. 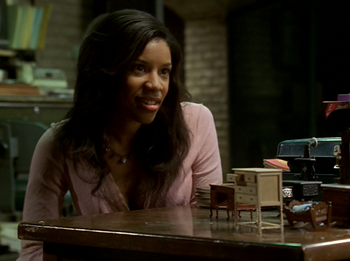 Played by: Wendy Grantham
He seemed like he was different.

A stripper working at Orlando's, the "gentleman's club" that operates as a front for the Barksdales. She's more or less completely uninvolved in The Game, and only works at the bar, spending time with the men who sit there drinking... as long as they keep buying drinks and tipping, that is. She begins a relationship with D'Angelo and even moves in with him, but is infuriated when Kima and Lester reveal that a group of the Barksdale lieutenants let a friend and co-worker of hers die unattended of an overdose at a party they had, and promptly moves back out and helps the MCU get some badly needed info to help put Avon away. During the investigation she grows close to Lester and remains in a relationship with him throughout the rest of the series.

The two young sons of Jimmy and Elena. 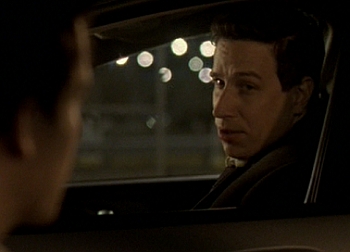 We may be assholes, but on the upside, there's an awful lot of us.

A special agent with the FBI, he's an old friend and major ally of Jimmy McNulty. In the first season he inspires McNulty to use modern electronic surveillance against the Barksdale organization by showing live surveillance during the bust of a drug production ring. He tells Jimmy it would be the last major bureau drug investigation in Baltimore because they are shifting resources to counter-terrorism.

Despite that, at several times over the course of the following seasons he helps or attempts to help the Major Crimes Unit with their cases, sometimes stepping beyond the limits placed on him by his bosses or FBI policy.
Brother Mouzone
Played by: Michael Potts 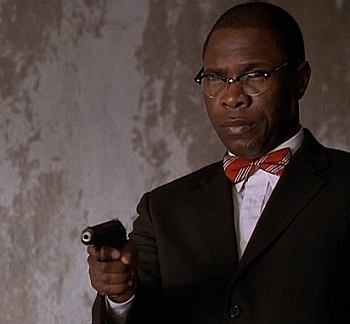 "Good day to you sir."
Let me be emphatic: You need to take your black ass across Charles Street where it belongs.

A hitman from New York hired by Avon Barksdale in season 2 to intimidate rival dealers working for Proposition Joe into leaving Barksdale turf, due to Avon not knowing that Stringer has secretly cut a deal with Prop Joe that makes the two organizations unlikely allies. After he is all too successful at driving off Prop Joe's dealers and puts the alliance and emerging Co-op in trouble, Stringer Bell sets him up by telling Omar that it was Brother Mouzone who tortured Brandon and where to find him. Omar seriously wounds Brother, but as the two men talk Omar realizes Stringer lied to him and gets medical attention for the wounded Mouzone.

In the hospital, Mouzone soon realizes that it had to be Stringer who set him up, but says nothing and leaves Baltimore after recovering from his wound. In season 3 he comes back to town, and forms an alliance with Omar to kill Stringer Bell as payback for the earlier set up. After they succeed, he leaves Baltimore for good.While not stated outright, his manner and dress suggests that he is a member of the Nation Of Islam.
Dennis "Cutty" Wise
Played by: Chad L. Coleman 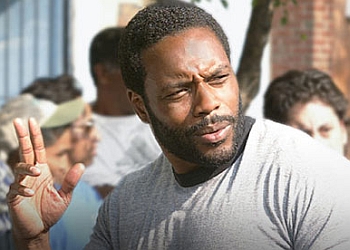 Introduced during his last days in prison, Cutty was a notorious soldier and enforcer in the drug game who served 14 years for murder. Although he is reluctant to get involved with The Game again, Avon attempts to recruit him before he leaves jail, and when he has difficulty adjusting to life outside prison he agrees to soldier for the Barksdale organization. However he soon finds that he doesn't have the killer instinct and urge needed in him any more, and leaves.

With funding help from Avon, he opens up a boxing gym to keep youth away from drug dealing. Although he ultimately cannot keep his favorite pupil Michael Lee from the streets, (despite the fact that he takes a bullet to the leg trying) he keeps doing what he can for others.

Cutty's girlfriend before he was sentenced to prison. Having managed to escape the life of the streets for a teaching position, she's disinterested in reviving the relationship, but helps him move forward with his life. As the head teacher for eight graders at Edward Tilghman Middle School, she easily grabs the respect and fear of the students. She's a valuable mentor to an overwhelmed Pryzblewski as he tries to gain his bearings as a teacher. 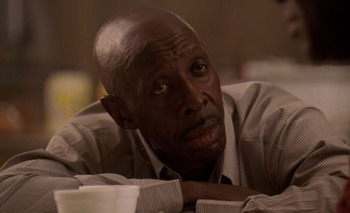 Played by: Melvin Williams
A good church man is always up in everybody's shit. It's how we do.

A well connected West Side church figure involved in many community projects. He plays a role in helping various figures over the course of seasons 3 and 4, including helping Dennis "Cutty" Wise get his boxing gym up and running, helping Colvin to first improve the atrocious state of Hamsterdam and later to be able to do the study of inner city school kids that Colvin takes part in during season 4. 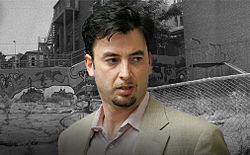 Doctor and professor of sociology at the University of Maryland with a special interest in repeat violent offenders. After receiving a grant from the university for a pilot study aimed at reducing this behavior, he plans to target 18-21 year olds and enlists Howard Colvin as an assistant. The former cop convinces him that they should focus on younger teenagers.

The Assistant Principal of Edward J. Tilghman Middle School, Donnelly's job is to keep the chaos of the school to a minimum and protect Principal Withers while he focuses on dealing with the school board and parents.

Snot Boogie
Real name Omar Isaiah Betts. He is killed at the start of the series.
The Governor of Maryland
The unnamed Governor of the state of Maryland. A Republican, he is almost certainly a No Celebrities Were Harmed version of Bob Ehrlich

in much the same way that Carcetti is based on Martin O'Malley.
Feedback