"Money launderin'!? They gonna come talk to me about Money launderin'!? In West Baltimore?! Sheeeeit, where do you think I'm gonna raise cash for the whole damn ticket!? From laundromats and shit!? From some tiny-ass Korean groceries?! You think I got time to ask a man why he given me money or where he gets his money from?! I'll take any motherfucker's money if he's givin' it away!"
—Maryland State Senator Clayton Davis

At the root of why nothing can ever get done in Baltimore, and, by extension, America, City Hall tells the story of Baltimore's political leaders and their Byzantine efforts at backstabbing and career advancement. City Hall is explored through the eyes of Democratic Councilman Tommy Carcetti, who achieves a feat most of the Democratic Party think impossible by winning election as the white mayor of a majority black city. Despite his initial idealism, he is unable to leverage his electoral success into political success, being forced to back up on his promises for the sake of his career. The City Hall storyline is an examination of the corruption at the heart of Baltimore political system and how internal reformers are either forced into resignation, acquiescence, or corruption. 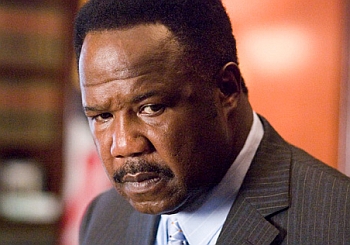 Fool, what do you think? That we know anything about who gives money? That we give a damn about who they are or what they want? We have no way of running down them or their stories. We don't care. We just cash the damn cheques, count the votes and move on.

Maryland state senator. Corrupt doesn't begin to describe him. He takes bribes from many sources, including the Barksdale organization under Stringer Bell, and does patronage and fundraising in return, when he doesn't simply fleece them. Two simultaneous investigations, one by the Major Crimes department of the Baltimore Police, the other by the FBI, are focused on him. Neither succeeds in bringing him down. 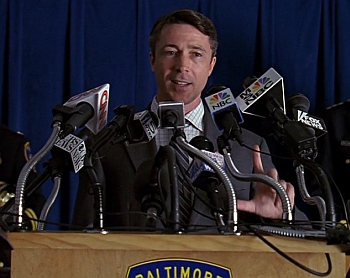 Yummy, my first bowl of shit.

A Democratic Baltimore city councilman whose tremendous competence is matched only by his extreme ambition, Carcetti fondly dreams of supplanting Mayor Royce and cleaning up Baltimore. Throughout Season 3, despite Royce apparently having a solid grip on the office of Mayor and being in a position to easily defeat would-be rivals, Carcetti nonetheless comes to believe that Royce is vulnerable and slowly begins putting together an operation that will allow him to challenge Royce. Carcetti gets his chance as the rise in violent crime, the killing of a key state's witness due to the lack of proper witness protection, and the political storm that is Hamsterdam all come together at once and undermine Royce's position.

In Season 4 a number of factors work in Carcetti's favor and he pulls off an upset, defeating Royce in the election and becoming mayor. Once in office, with his advisors Norman and Steintorf, he seeks out people he can trust within city government, particularly the police force so he can accomplish his goals for reform. After some time in office, however, Carcetti's grand ambitions come crashing to the ground when it's revealed that financial legerdemain had been used to to hide a massive deficit in the school budget. The best chance for fixing this hole in the city's budget is to accept help from the Republican governor of Maryland, but the governor (who sees Carcetti as a potential rival) humiliates Carcetti and attaches conditions to his help that would crush Carcetti's chances of challenging him the way Carcetti challenged Royce. Carcetti, already feeling the heat from the next mayoral election, (where he won't have factors working in his favor as he did against Royce) refuses to accept the governor's bailout and takes the money mostly from the police force instead, which makes his vision for a reformed and better police force impossible.Season 5 sees Carcetti increasingly ground down by his attempts to run the city and morally compromised as he tries to deal with the various corrupt politicians and broken institutions around him. He is unable to fulfill most of the promises he made to his allies and constituents, but he does manage to capitalize on McNulty's fake serial killer, and when he runs against the governor Carcetti uses the "serial killer" as a key issue, attacking his Republican opponent's positions on homelessness and the poor. At the end of the season he wins the governor's race, leaving behind the city with most of his goals unaccomplished and what good he has managed to do is in a position to easily to be reversed by his highly corrupt successor to the job of mayor, Nerese Campbell.
Clarence Royce
Played by: Glynn Turman 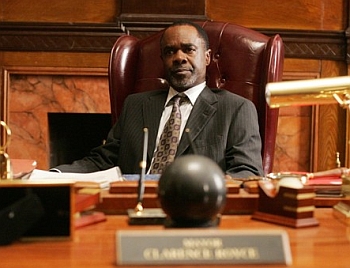 "Nobody here wants to do a real job."

Next year? For some things, that's a long time to wait.

Deeply corrupt mayor of Baltimore. His administration has seen a dramatic rise in violent crime, which he seeks to patch over as best he can. Major Colvin's experiment in establishing drug-free zones causes crime to drop, and he makes the mistake of delaying action in bringing them to an end. When exposed, Carcetti campaigns against him for allowing them, and beats him in the mayoral election. 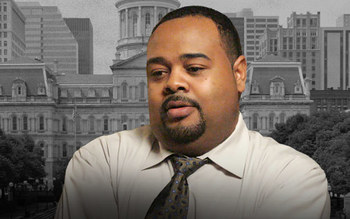 Royce's second-in-command and organizer of his re-election campaign. 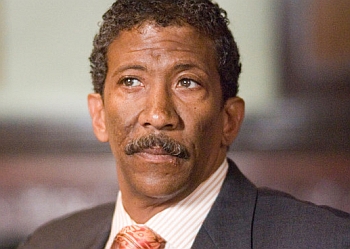 "I wish I was still at the newspaper so I could write on this bullshit."

The people running your campaign are professionals, Tommy. Don't try this shit at home.

Tommy Carcetti's deputy campaign manager, and later, his right hand man. He is brutally honest, keeping Carcetti in line and his feet on the ground. 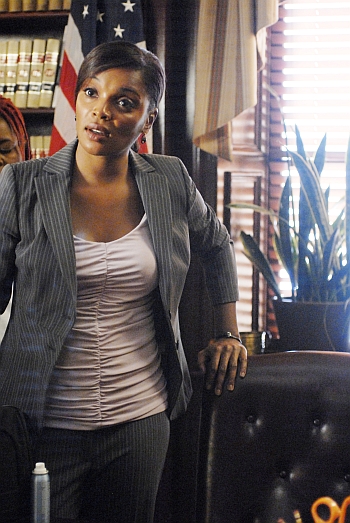 "It was supposed to be my turn!"

President of the Baltimore City Council. When Carcetti is elected mayor, she is immediately hostile to him because she was understood to be next in line after Royce. He proves to be pliable, and she comes around to pulling strings for him, though she scuttles many of his planned projects. She is elected mayor after Carcetti. 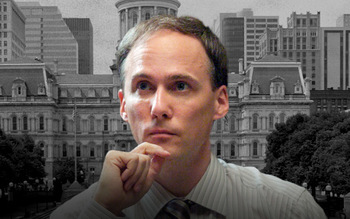 Carcetti's chief of staff. A realist, he lets Carcetti know that many of his plans are infeasible. Later, he pressures Daniels to alter crime statistics. 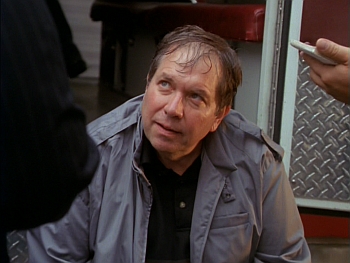 "Black. Big. With a large weapon."

Rawls: Mayor's office already called twice, worried sick about the man. That's a whole lotta campaign contributions sitting on the back of that ambo.

Krawczyk is a major behind the scenes player in Baltimore as he's the President of the Baltimore City School Board, an influential real estate developer and political fund raiser. He's also strongly implied to be corrupt and appears to take part in the White-Collar Crime perpetuated by other corrupt legal and political figures such as Clay Davis, although he is never explicitly seen to do so. He is an enemy to the dockworkers, as he spends season 2 pushing to have the grain pier on the docks torn down and used for real estate development while they're trying to revitalize it and use it as a way to increase activity on the docks, and he works as a real estate consultant to Stringer Bell. 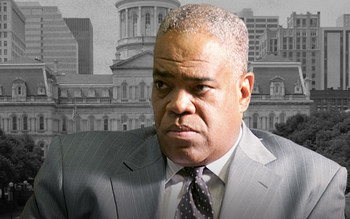 Played by: Frederick Strother
I hear you took a swipe at Hizzoner the other day on that witness murder. You keep on it, Councilman. A little smack here and there does this administration a world of good.

A State Delegate and a longtime major Baltimore political figure and and a member of the influential State Appropriations Committee. He's something of a moral voice of authority within the circles of Baltimore politicians as he has full support of the religious leaders, looks to address the concerns of the citizens in a decent way and is critical of political corruption. 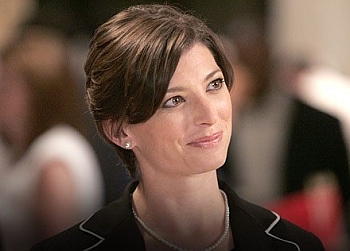 "You know, when I took this job, you promised me a win bonus."

He's taking on a two-term incumbent. It's all gonna be ugly from here.

A Washington-based political consultant and campaign fixer. She grew up in Baltimore and was a schoolmate of Carcetti in college, where it's hinted that they had a relationship. When Tommy first tells her of his intention to challenge Royce to an election she's extremely dubious of his chances and all too aware of the uphill battle being waged, but agrees to become his strategy manager due to the possible recognition it will win her if they can pull off the upset. 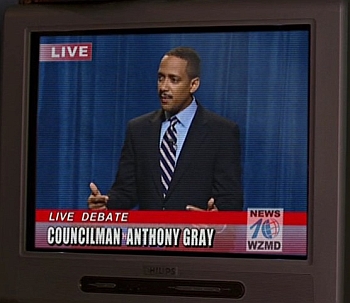 Thought I'd be the education mayor.

A Democratic Baltimore Councilman and a close ally of Carcetti before they turn into rivals with both trying to be elected mayor.