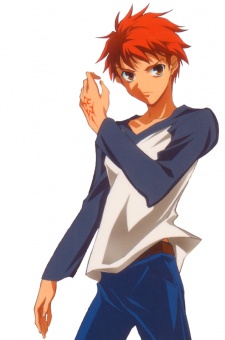 The original protagonist of Fate/Stay Night, although now he's not so much the main character as he is one of them. He became famous in the Mage world after his destruction of the Grail, and as a result has been sought out by several individuals in the Magus Wars. His primary goal is, understandably, to put a stop to the Magus Wars and end the killing. 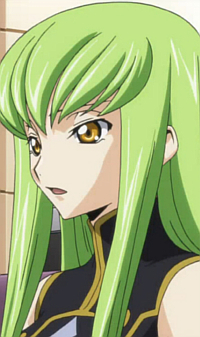 Vain, self-obsessed, arrogant and egotistical, Sierra hails from the blue-blooded Bartholomeloi family, seen as the most powerful Magus line in the world. Due to her unique Noble Circuits, she is capable of a level of prana far greater than even an advanced Magus. Vindictive and cold, she desires to use the Magus Wars to weed out the Magi she despises as weaklings and transcend all other Magi in the Wars. Despite intending to summon Heracles, her sheer magical power meant that she called Gilgamesh to her instead, and her resemblance to Enkidu has helped ensure his acceptance of her as a Master.

The closest thing to a main villain, she is played by Saska, the head Administrator. 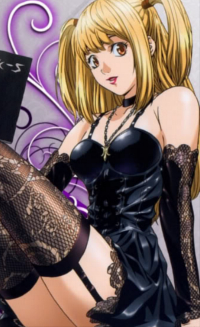 An average-level Magus hailing from Wales. Cassiondra is particularly skilled elemental control, revolving around the control of the fire and water elements, along with dabbling in an area of Magecraft known as 'psionics' from her Greek heritage. Known for a very straightforward, logical personality and way of speaking, she came to Fuyuki City in search of Shirou Emiya after months tracking him down, looking for answers as to why he destroyed the Holy Grail.

Head of the Tohsaka family of Mages, keeper of the lands around Fuyuki, and participant in the Fifth Holy Grail War. As she was aware of the Magus Wars, Rin was able to prepare somewhat for their eventual occurrence in Fuyuki. The second person to summon a Servant, Rin was able to puzzle out that the Servant system was working again and resummon her Servant from the previous war. She remains just as Tsundere as ever. 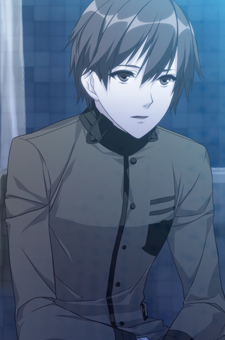 A canon character, originally from FateExtra. Born with a rare brain disease that afflicted Hakuno with memory loss, his parents were approached by a scientist/doctor named Twice H. Piecemannote Also from Extra, who agreed to treat his condition if they would recover and share the Holy Grail for him. They began their search just as the Fourth War was finishing, and were killed in the fire that concluded it. Twice became the boy's foster father and began grooming him to enter the Fifth Holy Grail War and win the Grail for him, a plan which failed as he was unable to summon a Servant in time. With the events of the Magus Wars, Twice assumed that the Sixth Holy Grail War had begun, and instructed Hakuno to summon a Servant and fight. Hakuno, determined not to let his foster father or extended family down, did exactly that.

One of the survivors of the Fourth Holy Grail War, and Rin's former Master at Clock Tower. After the end of the Fourth War, his experiences with Iskander and his growth as a human being lead to him shaking off his whiny, narcissistic attitude and developing into a strong-willed, intelligent man. Ten years after the War's end, he returned to Clock Tower, and assisted the Archibald family, of his former lecturer at Clock Tower (killed during the Fourth War), in recovery, despite his lethal relationship with the former family head. As a reward, he was named Lord El-Melloi II, and became one of Clock Tower's finest lecturers. A mix of duty and curiosity lead to him returning to Fuyuki: as the head of the Archibald family, he was obligated to fight on their behalf, but more pressingly he is curious about the irregular nature of both this Servant War, and the war that preceded it a year-and-a-half ago. Naturally, the first thing he did was resummon his former Servant.

The timid, gentle underclassman of Shirou and Rin, who developed a crush on Shirou several years ago. After Shinji's death in the Fifth Holy Grail War, Zouken's focus shifted entirely to Sakura, attempting to slowly break down the resolve Shirou had given her. He failed, but as a result she's become even more adept at hiding her emotions and presenting the face she wants others to see. Along with Zouken, she is the Master of Lancelot, providing the Berserker with prana and holding three back-up Command Spells even though the Knight is contracted with Zouken. Whilst Zouken's aims are currently unclear, Sakura is slowly attempting to move from her position as one of Zouken's pawns to a player in her own right - and above all, she wants to protect Shirou.

At first glance, Herman is an aging, friendly man of God. In truth, he is a man of science, a capable Magus, and a Church Executor. In him, two bloodlines meet: he has inherited the Thaumaturgical skills and style of the Courtemanche family, and has learned the prowess with a halberd from the Henchoz family. A former Executor, Herman has traveled to Fuyuki in the hopes of using the system there to reach The Root, access the Akashic Records, and determine the purpose of human existence.

A Magus hailing from South America. Casual and peaceful, she was lost in the Amazon at a young age where she discovered her Mystic Eye before being rescued by a Shaman and returned to civilisation. Kind-hearted but not soft-hearted, she entered in the Magus Wars for her children's sake; she wanted to end the War without further bloodshed, and wants to stop it from harming her children. These feelings extend to others, as she dislikes seeing children and young people involved in a war. Though she was trying to summon the hero who slew the Nine-Tailed Fox, she ultimately ended up summoning Tamamo-no-Mae. 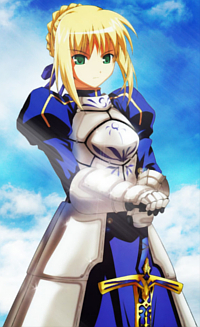 The former Servant of Kiritsugu Emiya in the Fourth War, and Shirou Emiya in the Fifth. Accidentally summoned by Shirou (again), Saber's true nature as a Spirit is again muddy - is she still a Counter-Guardian, or has she died in her own time and entered the Throne of Heroes to be summoned as a regular Heroic Spirit? Retaining all of her memories or the last war and her feelings for Shirou, Saber's primary goal now seems to be to protect Shirou and end the Magus Wars instead of fighting for the prize of the Holy Grail. 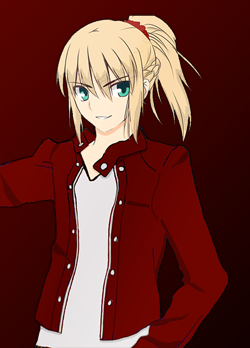 The only son of King Arthur. In legend, Mordred, manipulated by his mother, attempted to seize the throne of Britain in Arthur's absence, tearing the country apart in civil war and ultimately resulting in both his and Arthur's own deaths. He died resenting Arthur for refusing to pass the throne to him, believing he could have made a better King. Unlike his Fate/Apocrypha incarnation, Mordred is male, despite his feminine appearance. 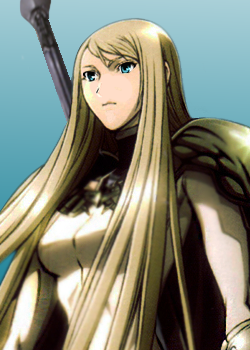 Wulfina Ecgtheowing, only daughter of Egtheo is better known as the Geatish hero Beowulf. Heir to the Swedish throne, Beowulf is famed for slaying the demon Grendel, and his mother Acennic. She rose to the throne as the King of Thanes, hailed by all across northern Europe as the greatest hero to ever live. She has been summoned as a Saber, and takes pride in the battles between heroes that is sure to come. 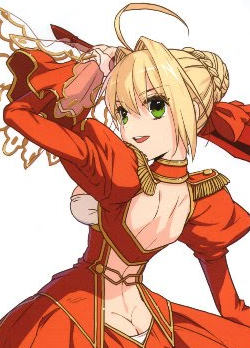 Theatrical, vain, pompous and somewhat arrogant, but with a genuinely good heart and a caring relationship with her master. In life, Nero was the Fifth Emperor of the Roman Empire, remembered, perhaps falsely, as a tyrant. Originally one of the three playable Servants in Fate/Extra, she was summoned by Hakuno with the assistance of Twice H. Pieceman, and has much the same relationship with him as she did in Extra. 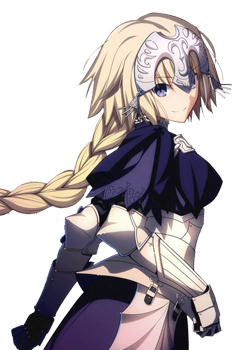 A hero of France, renowned for her unwavering faith in God who lead the French to several victories during the Hundred-Years' War before being burned at the stake at the age of 19. She passed into the Throne of Heroes and became a Counter-Guardian, willing to spend eternity as humanity's guardian and protector. Unlike her Fate/Apocrypha incarnation, Jeanne acts as a regular Heroic Spirit rather than an overseer of any war.
Archer-class Servants 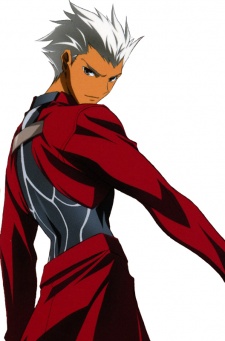 In life, Shirou Emiya, who lived his life according to his ideals of self-sacrifice and died happy. In death, a Counter-Guardian, forced to spend eternity killing the humans he became a Counter-Guardian to protect. Feeling betrayed by his ideals, Archer's goal is to kill his younger self, thereby causing a time paradox that will remove himself from his existence as a Counter-Guardian. Originally summoned in the Fifth War, he was defeated by the Berserker of the war, allowing Shirou, Saber and Rin to escape. Summoned again by Rin, his goal remains the same: kill Shirou Emiya. 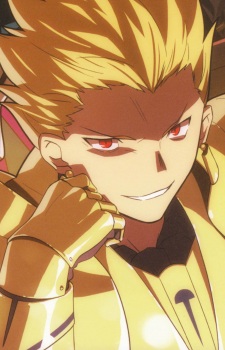 The Legendary King of Heroes himself. The ancient King of Uruk, and the world's oldest hero. Along with Enkidu he had many adventures, and rebuilt the Walls of Uruk with his son. In life, he was obsessed with achieving immortality, as he was still bound to a mortal life by his one third humanity. After he was slain by Saber at the end of the Fifth Holy Grail War, he was the first Servant to be summoned in the Magus Wars by Sierra.

The Biblical first woman. Summoned as an Assassin due to giving the Fruit of Knowledge of Tov Wa-Ranote Good and Evil to the first man in full knowledge that it would lead to his death.

The greatest knight who ever lived. After his death, Lancelot fell into madness, his life spent in guilt and regret because of his actions in saving Guinevere. Initially summoned by the Matous in the Fourth War, he was defeated by Saber shortly before the War's end. This time, he has been summoned in a manner similar to Arturia in the Fourth War: Zouken Matou made the contract and summoned him, but his prana is supplied by Sakura Matou, who holds three Command Spells to go with Zouken's own.