Video Game / The Legend of Spyro
aka: The Legend Of Spyro A New Beginning 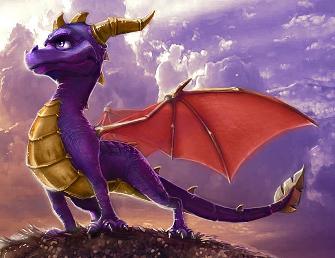 The Legend of Spyro is Activision/Sierra's Continuity Reboot trilogy of video games based on the Spyro the Dragon franchise. In comparison to the lighthearted tone of classic Spyro, the Legend Trilogy had a much darker atmosphere, including the major changes to characters, story, and gameplay.

Whereas the original games usually opted for an Excuse Plot, these games had a complex story spanned over three games. Basically, Spyro is a legendary Purple Dragon, a rare breed that can master the Elemental Powers of every other breed of Dragon. This would be useful in fighting off the Dark Master, a powerful enemy trying to destroy the world, except that the temple Spyro was born in was attacked, forcing Ignitus, guardian of the eggs, to send Spyro's egg down a river. There it was found by a family of dragonflies, who raised Spyro to believe he was a dragonfly, too. A big, purple dragonfly.

Of course, eventually Spyro realizes that he's not really an insect and sets off with his foster brother, Sparx, to find out who he is. That's when he meets Ignitus, and the story kicks in:

A movie was planned for this series but was cancelled.

This series has also caused a bit of a gap in the Spyro fanbase. Although the creator mentions he only "scratched the surface" with the trilogy, the Spyro franchise ultimately got rebooted again and spun-off into the far more successful Skylanders franchise. The Legend series wasn't entirely forgotten, though, as several elements from it carried over into the Skylanders lore. Spyro's backstory is based on his Legend counterpart, and Cynder returns as a playable character. Big Bad Malefor is also mentioned in the backstories of several Skylanders and appears in person in the tie-in comics. Furthermore, the Skylanders TV show, Skylanders Academy, has Spyro as the main character, and added Cynder and Malefor in season 2.