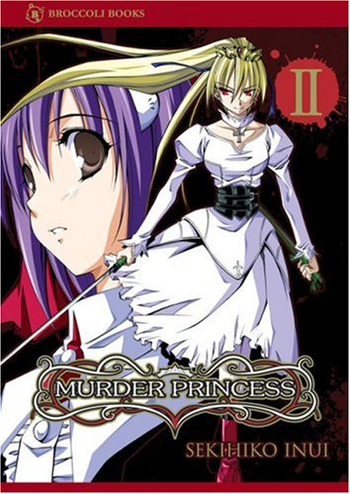 Hard times are upon the Kingdom of Forland: the heir apparent Kaito has gone missing and the righteous king was slain by the Evil Chancellor, Dr Akamashi, and his Robot Girl assassins. The only remaining royal family member, princess Alita, flees the castle in the last moment, chased by the Chancellor's Faceless Goons. Yet luck suddenly turns in her favor when she literally falls into the embrace of the most badass Action Girl in recorded history: bounty hunter Falis. After an accidental near-death experience, the two switch bodies and Falis agrees to assume Alita's persona, take Forland back from the usurper, and protect it until prince Kaito's return. Rounding up her henchmen, she proceeds to the castle to kick ass and earn the title of the most brutal princess in history...

Murder Princess is a 2005 manga by Sekihiko Inui and a six-episode OVA adaptation produced by Bee Train. Although initially believed to be a Red Herring to draw attention from Bee Train's real Next Big Thing for 2007, El Cazador de la Bruja, the OVA proved itself as a very solid piece of work and contained just the right amount of cool action, Romantic Two-Girl Friendship, and fitting (and slightly metallic) musical score to appease long-standing Bee Train fans with its character designs and straightforward story.