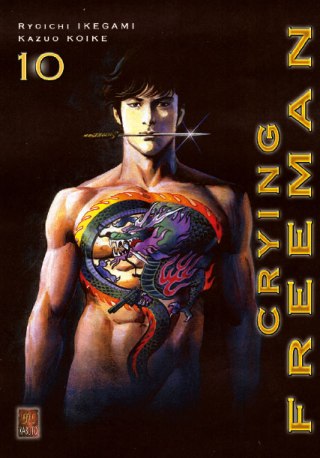 Tears from his eyes, blood from your throat.
"I do not believe that a murderer could weep so piteously... He cried without making a sound. His tears fell like a soft, quiet rain..."
Advertisement:

Crying Freeman, a 1986 manga illustrated by Ryoichi Ikegami and written by Kazuo Koike, follows the story of Yoh Hinomura, an internationally-renowned potter from Japan. A Chinese triad organization known as "The 108 Dragons" kidnapped Yoh and turned him into an unwilling assassin: after sticking acupuncture needles in him and implanting post-hypnotic suggestions, Yoh became one of their best assassins, killing for the group whenever he is ordered to. Whenever Yoh kills, he cries out of remorse for his victims (hence the name of the series). When solitary artist Emu Hino witnesses one of Yoh's assassinations, the Dragons order him to eliminate her — but Yoh's love for Hino could become his salvation...Set in the same universe of Kazuo Koike's Duet, and presumably Mad Bull 34.

No relation to a bespectacled, alien fighting scientist note Who doesn't cry by the virtue of being a Heroic Mime. Has two unofficial Hong Kong adaptations which are both In Name Only, Killer's Romance and Dragon from Russia, coincidentally both debuting in 1990. It was adapted on live action film in 1995 by director Christophe Gans (Brotherhood of the Wolf) starring Mark Dacascos.

The 1995 live-action film contains examples of the following tropes: